This free play bingo game from iSlotbet is not for the faint hearted. If you are a horror movie buff there is not doubt you will be familiar with the Paranormal Activity franchise and this slot is based entirely on the movie. If, like us the creepy audio was freaking you out, you can turn off the sound, or thrill-seeking horror junkies can turn it right up! The reels will terrify you with symbols like a Ouija board, demonic symbol, chandelier, video camera, ghostly figure and then the extra scary child and bloody hands. Make sure you have the lights turned on for this one, and get under the covers as you play Paranormal Activity.

iSoftbet is a company that goes hand in hand with innovation with their extensive experience and over 400 bingo game in their portfolio. They offer flexible and tailor-made services and are a trusted and well known, high quality gaming provider based in London. They are specialists in regulated markets and are certified in Italy, the UK, Belgium, Spain and Alderney. They have developed and delivered the highest quality online gaming innovation managing to engage and inspire, to provide gaming that players will be coming back for. With lots of promotion bingo that await players in every spin. 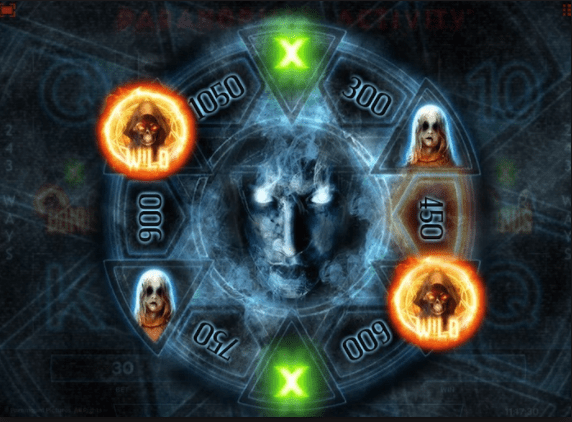 The Paranormal Activity film was originally developed as an independent feature and was given film festival screenings in 2007 and then acquired by Paramount Pictures and modified. The film earned a staggering $108 million dollars at the U.S Box office after a limited U.S release in 2009. It made a worldwide total of $198 million, and Paramount had acquired the rights for just $350,000 making it the most profitable film ever made. It was reported that Paranormal Activity was made for just $15,000 so the profits are truly incredible.

Get ready to make some money yourself as you immerse yourself in the world of terror:

WILD SYMBOL – The wild in this game is represented by the spooky child and the wild will substitute for all other symbols except the bonus and scatter symbols.

THE SCATTER SYMBOL  – The scatter symbol is this game is the bloody hand and will pay in any position by triggering three on your reels.

BONUS WHEEL – you will trigger the bonus wheel when you spin in 3 bonus symbols on reels 1, 3 and 5. You will be awarded up to 3 free spins of the stone wheel or an instant win.

PARANORMAL EVENT – randomly at the start of any spin, you may experience Paranormal Activity. Two ghostly hands will press upon your screen as if there is someone trapped inside your computer and up to 5 extra wild symbols will be generated and frozen onto the reels for that specific spin. 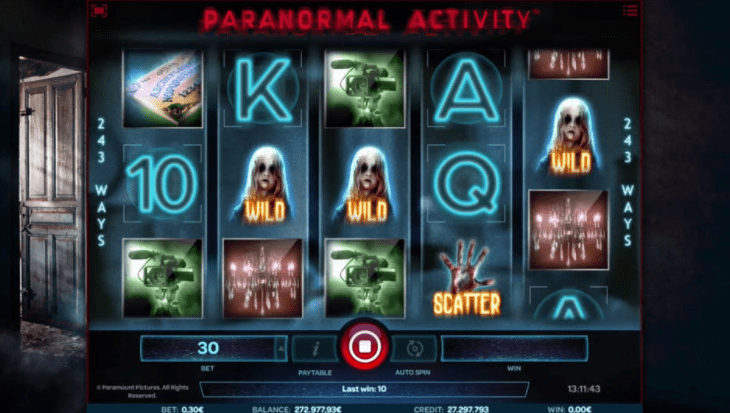 If you enjoyed Paranormal Activity why not try another Barbados online slot.