The Warriors is a cult film from the late 70s featuring the dangerous streets of New York City, its gang members and their politics.

iSoftBet has taken that premise and modelled a casino online bingo slots game after it. The game incorporates the lead characters of the film, paired with an ominous backdrop and sound effects of traffic and city life to complete the feel.

The online slots game offers Wilds and a pretty badass bonus feature that can fetch players up to 50 Free Spins, as well as a 5X Multiplier! The Warriors has 5 reels and 243 ways to win, and a betting range of £0.50 to £25.

iSoftBet is a London based gaming company with approximately 400 bingogames. They focus on 5 reel slots and popular television series or movies inspire several of them. However, they don’t shy away from slot classics such as Irish or Gem themed slots.

The gaming developer is not afraid to experiment and create different formats for online slots. Some of their games have 3 reels (instead of the conventional 5) and then optional reels to increase players’ chances of winning. They also feature games (like The Warriors) that utilise 243 ways of winning technology instead. Some of their games include:

Note that iSoftBet games are popular with most players when playing at Barbados. 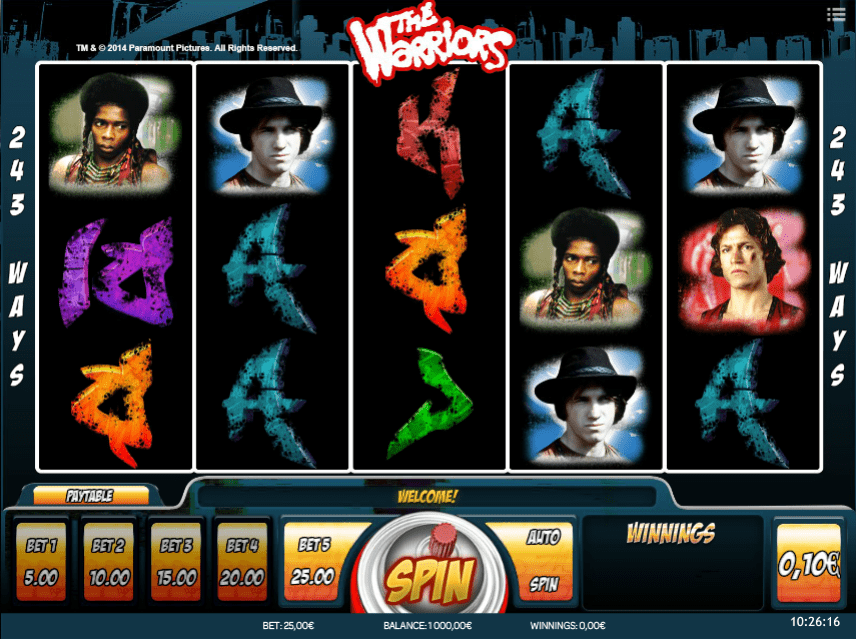 The Warriors is modelled after the classic movie. So it is little surprise that it is set in the dangerous streets of New York City. This is depicted vividly in this online slots game. The game features graffiti-fashioned playing card symbols, dimly lit subway station, and of course characters from the movie.

The Warriors uses its iconic characters as symbols for this online slots game. Their pay outs are as follows.

The symbol with Swan and Mercy’s characters represents the Wild Symbol in this online slots game. Like all other Wilds, the Swan and Mercy symbol can take the place of any symbol (except for the Bonus) to form a winning combination.

Also, any winning combination that uses the Wild Symbol will be automatically doubled!

The bonus symbol in this online slots game is the game’s logo itself! It appears on reels 2 to 5. When it lands on the odd numbered reels, players will get 5 times their total stake, and a possibility of 50 free spins! Furthermore, stacked symbols will be accompanied with multipliers anywhere between 2X to 5X! 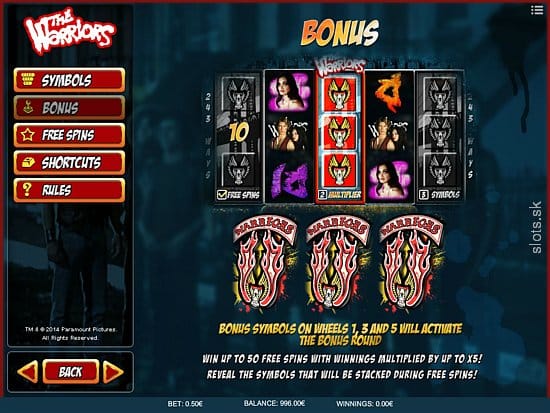 It is always a good experience playing a game with context. Being able to relate to the game and its characters further add to the overall experience. The Warriors has done a superb job in delivering a cinematic experience right on a slots machine. The visuals of the game are terrific. The bonus features are also very lucrative and jam-packed with suspense.

If you enjoyed The Warriors, you should definitely try Immortal Romance slots.