Everyone who has had some kind of experience with bingo will know that this is a game of luck, which means that all players have the same chances of winning as each other.

This is a totally random game, based on numbers being called out in a random fashion.

But that doesn't mean that there aren't some bingo strategies that you can use to increase your chances of winning.

Is There A Strategy To Bingo?

Bingo is such a fun and easy game to play for anyone, of any age. It doesn't require a lot of skills to get the hang of, which is why it it’s so popular across the nation.

It can be so exciting to wait and see what numbers come up and whether you are lucky enough to have them.

Whether you play online bingo or offline games, the thrill of it is something you'll recognise instantly. This thrill comes from the fact that it is a totally random game, with everyone having the same chance of winning - but is this always the case?

Of course, there is no real way to dictate which way the numbers are called out, but there are some strategies that you can use to increase your chances of winning.

Unlike other casino games, like poker, bingo is a truly random one and it does not require skill. Even though it is not necessarily based on strategies, there are some bingo strategies you can try and use within a game to increase your chances of winning and get yourself closer to grabbing the jackpot.

How To Play Bingo

There are various different versions of this game, even though it is such a simple one to play. There are classic versions, such as 75-ball and 90-ball that almost anyone can get involved with as well as some more complicated or uniquely themed options (such as no deposit bonus bingo) when it comes to online bingo.

In order to figure out how to use bingo strategies within a game, you first need to know how to win bingo properly.

The main difference between the different versions of bingo is of course the amount of numbers that can be called out and therefore the bingo cards that are being used.

In a standard game of bingo, there are normally three main opportunities for prizes to be won.

The smallest prize is given to the first player who calls out 'line', which is a horizontal row of 5 numbers, with the second prize being given to the player who marks two lines.

The main jackpot goes to a full house, which is when all the numbers on a card have been called out and marked off.

This is the main structure for prizes when it comes to bingo, but there are various different versions of this. There will be more winners typically in online bingo, as many of these games have progressive jackpots.

How To Increase The Chances of Winning

There are some bingo strategies that you can use that will increase the chance of winning if you do them right. These are not guaranteed and they will not ensure that you get the jackpot.

Instead they are focused on manipulating the way you play the game in order to increase your odds of winning from what it was at the beginning. As this is a game of chance, everyone who will play bingo typically has the same odds at the start of every game.

There are several popular theories among bingo players and we are going to share with you how you can use them in a game. These will not influence the numbers that come up in games, nor will it ensure that the cards you buy are going to be winning ones but they can drastically improve your odds of winning and are based on scientific research.

This strategy was created by Joseph Granville, who was a mathematician and analyst. Granville was renowned for his successful financial market predictions, which lead him to looking into other areas of estimation including bingo games.

The Granville strategy is a popular one for online bingo players as it is quite easy to follow and can be done with any bingo cards. This strategy revolves around the idea of ensuring that the numbers on your bingo cards meet a certain set of criteria that you can choose.

For example, bingo cards that have an equal number of even and odd numbers would be good for this strategy or cards with an even split of numbers that end in 1 to 9.

Granville spent a lot of time researching the true randomness of games like bingo. He took these results and combined them with the laws of probability which helped him determine that there is an equal chance that both odd and even numbers will be called out, as well as high and low numbers.

Even though this is a popular idea for online bingo, it might be quite hard to do as bingo cards online are fully automated so you might not get the chance to pick your own. It is still a good strategy to have in mind when playing a game, whether online or off, just on the off-chance that you can pick your own cards.

This is a slightly less popular strategy for bingo players, but it may be something you want to consider using. This theory was developed by L.H.C Tippet, who was a British statistician.

Tippet came up with the theory that the longer a game of bingo lasts for, the higher the chances will be that the numbers called will be median. This sounds complicated, but it essentially means that in a 90-ball game of bingo, most of the numbers will be close to 45 which is the medium number for this amount,

A 75-ball game of bingo is considerably shorter, which means a lot of the numbers will be around 38.

The shorter the game of bingo, the more likely that numbers will be called out from either end of the spectrum and therefore will be harder to predict.

In order to use this strategy, you first need to determine how long the game of bingo you are playing is going to last. All you need to work out here is whether it is a game that will last a long time or finish quite quickly, as this can determine the average numbers called out.

If you are playing a shorter game of bingo, like some of the fast-paced options online, then try to choose cards that have a set amount of numbers on either end of the spectrum. This means those that are either closer to 1 or 78 and 90. For longer games of bingo, such as blackout bingo, look for cards that have more median numbers between 38 and 45.

This is a fun system to try out, but remember that bingo is a game of chance and although these strategies can increase the odds of winning they do not offer a guarantee. 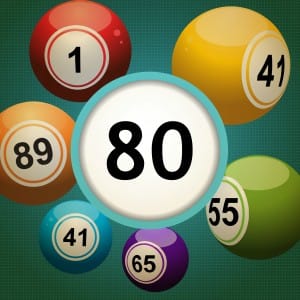 What Other Strategies Work?

As well as these complicated, scientific theories surrounding bingo, there are also some other tricks that you can try out in a game.

These are very popular with those who like to spend their time playing bingo.  Again, these are just ideas that can help increase your odds but are not guarantees.

As the old saying goes, 'good things come to those who wait' and this can also be applied to bingo.

It makes sense that the more people that are playing bingo at the same time, the lower your chances will be when it comes to winning anything. This means in order to increase your odds, you should try to avoid peak times when entering a bingo game.

This includes weekends, evenings and lunchtimes as this is typically when people have more free time and will turn to bingo games. Instead, go to games where there are fewer players such as in the morning or on a weekday.

If you're playing bingo online, you will be able to see how many players are in one bingo game at a certain time so use this wisely and find one with less players in.

The more cards in play, the greater your chances will be at getting a jackpot of some kind.

This is a simple strategy, but it can work. The more cards you have ensures that you will have more numbers that need to be called out.

Buying many cards at once can increase the chances of a jackpot, as there are more numbers to be called out so it will be likely that at least one of them is a winner. With many cards, you have many chances!

As we have mentioned with the theories above, choosing cards that cover a wide range of numbers is another good way to increase the chances of getting a jackpot.

This is something that will occur when you buy multiple cards for your games, as there will be more numbers to choose from and these should cover a wide range due to their random placement on the cards.

If you have the opportunity to pick your own cards, which is something that is allowed in certain games but may be harder to come by online, then make sure to consider your options carefully. You want to make sure that the cards you pick cover as wide of a range of figures as possible to increase the chances of them winning.

Another good way to ensure that you will be walking away from your games of bingo with some form of prize is to only play those that offer more than one jackpot. Most standard games of 90-ball bingo will have 3 prizes available, with the first two going to players who have got lines and the final being for a full house.

The more prizes there are on offer, the greater your chances will be of getting one for yourself.

This means that you should also consider playing progressive jackpot games, as typically the main prize here will be shared among several players.

Take advantage of the range of progressive games that are available online, including those played across networks as you could be in with a chance of winning your share of thousands or millions of pounds!

One of the best thing about playing bingo online is the promotions, bonuses and offers they have on a regular basis.

You can get bonus for almost anything online, whether you're looking for a new bingo site to try out, refer a friend, or even player certain games. Most bingo websites will also offer prizes and promotions based on the number of cards you buy and how much you spend.

If you are planning on trying out these bingo strategies, make sure that you are choosing reputable and licensed bingo websites.

Only spend your time and money on legit bingo games with good reputations. Consult reviews from other players to determine which games are the best for their return to player rating.

At the end of the day, it does not matter how many cards you buy or how many games you play - if they are on dodgy websites, you could walk away with nothing. You could try these strategies on a few of our free bingo games.