The retro look and feel of Cash Buster Tower is what makes this vivid masterpiece of a mobile bingo come to life, therefore making it an ideal game for those who want to get back to gaming’s roots. Nowadays, slot machines are filled with all sorts of gimmicks to keep us returning, but this Instant Win Gaming title is a refreshing change of pace, while still keeping everything surprisingly contemporary.

The reason for it being so different could be down to the number of reels, as instead of the typical 5 we’re given 6; these towers are what can fall down as you play. It’s like a modernised version of Tetris, but with cash prizes and special features involved. So as long as you’ve got 50p to spend, Cash Buster Towers has the gameplay for you with much bingo offers!

If you haven’t heard of IWG, that’s okay because few people have, and yet you may have played some of their bingo games without realising it. Having been around for the past ten years, this label has created over 250 titles worldwide, which is a lot more than many of the other iGaming labels out there. And yet it still feels like an unknown company.

Not that the enigmatic quality of the brand matters when you look at the software they’ve developed, which is flush with HTML5 and 3D graphics, resulting in an array of stimulating games for the masses. Hard to believe then, that this company is based in London, as typically all the more successful developers are out in Malta. 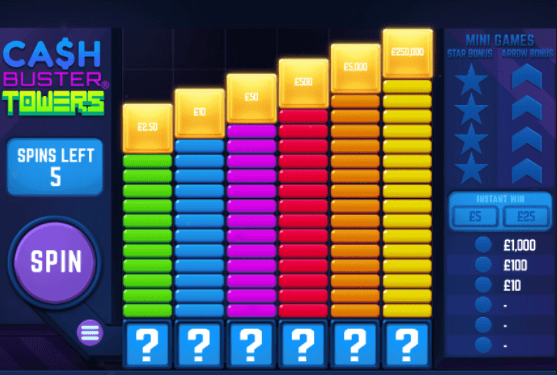 In spite of this being sold as a slot machine, there’s a lot of instant win dynamics at work here, and so we're loathed to review it as a conventional slot. Cash Buster Towers is all about how you roll the dice, or in reality spin the towers, with your choices impacting on the amount of money you make. You may be in luck and walk away with the £100,000 jackpot, but that would take some incredible luck indeed.

● Instant Prizes: Should four or more circle icons appear at the bottom of any one of the six towers, players will be awarded an instant cash prize. The aim is to obtain at least six circles to get the biggest of all the prizes, with the circle gauge measuring your progress.

● Mini Games: There’s two of these to activate, via the arrow and star symbols, with a minimum of four needed for each of them. If you get the arrow mini-game, there’s a wheel-based bonus that can gift you blocks being destroyed and/or monetary rewards. Whereas the card game is about you partaking in a pick me style feature in order to get real money returns. 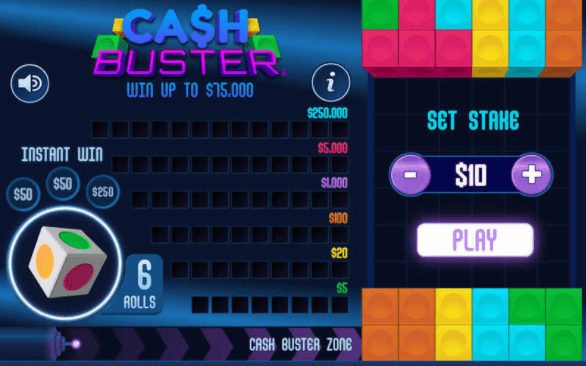 This is an intriguing game, one that definitely challenges the slot machine conventions we’ve been given, but we’re not sure it works overall. There’s a lot going on, with the dynamics of the game feeling complex to those not used to playing such alternative titles. Our advice would be to try other IWG if this feels like too much of a challenge for you, as the brand has plenty of activities to go around.

If you enjoyed Cash Buster Towers why not try Starbust slot game online?