This is a game for the history buffs, The Battle of the Red Cliffs is also known as the Battle of Chibi and was a divisive battle which was fought fiercely to make way for the Three Kingdoms in China after the Han Dynasty. History lesson over, this slot will take you to the oriental world of Ancient China to embark on an epic oceanic adventure with the three robust and brave generals Sun Quan, Liu Bei and Cao Cao. The three generals are engaged in a death-dealing battle on the high seas and this is your chance to claim victory and be rewarded handsomely for your feat.

Pragmatic Play’s vision is to create an unrivalled gaming experience that is second-to-none and they have most certainly achieved this in their delivery of 3 Kingdoms Battle of Red Cliffs. The talented developer has a portfolio of over 80 slots and online bingo games and is unequalled in it’s design and ability to create games in which players can be completely immersed in the game. Their passion is clearly demonstrated in their games and their success is deeply rooted in their understanding and respect for their players and their needs. If 3 Kingdoms Battle of Red Cliffs ticked all the boxes for you, give some of their other thrilling bonus bingo games a whirl: 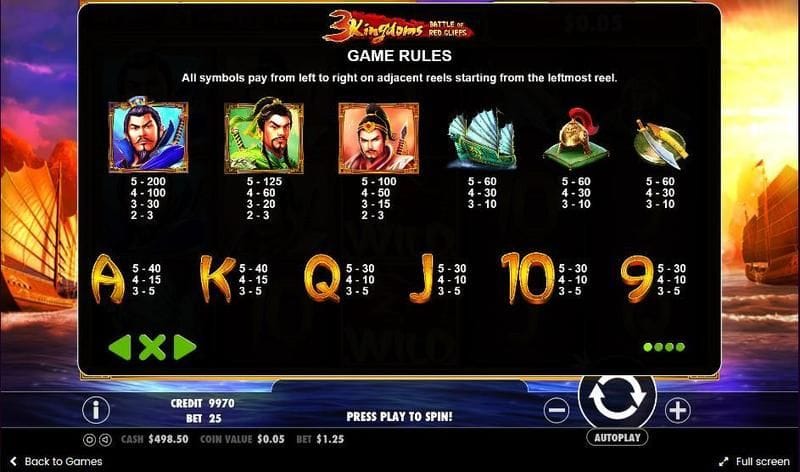 3 Kingdoms Battle of Red Cliffs is a 5-reel slot game that is played across a standard 5 x 3 configuration and has 25 fixed paylines to play across in bingo games. Although the paylines are fixed, the game is still customisable as you can alter the value of your bet with each spin, with the value of the coins starting at 0.01 all the way up to 0.50 so the choice is yours! You’re able to wager between 1-10 coins on each playline giving you a minimum bet of 0.25 and a maximum wager of 125.00. Build up your coins collection to embark on a voyage to the highly sought after progressive jackpot as well as seizing free spins and part-taking in bonus rounds along your epic eastern expedition. In this thrilling game players can expect a somewhat generous RTP percentage, which is set at 96.50%, not bad at all especially considering there are myriad bonuses and extras to be plundered from the trio of warlords. The graphics are excellent in this game which makes for smooth and entertaining gameplay. Some players may agree that due to the level of complexity the game has to offer its players, that this slot game is suited best to those who have a little more experience as 3 Kingdoms Battle of Red Cliffs is not necessarily for those who are looking for a piece of pie slot game. 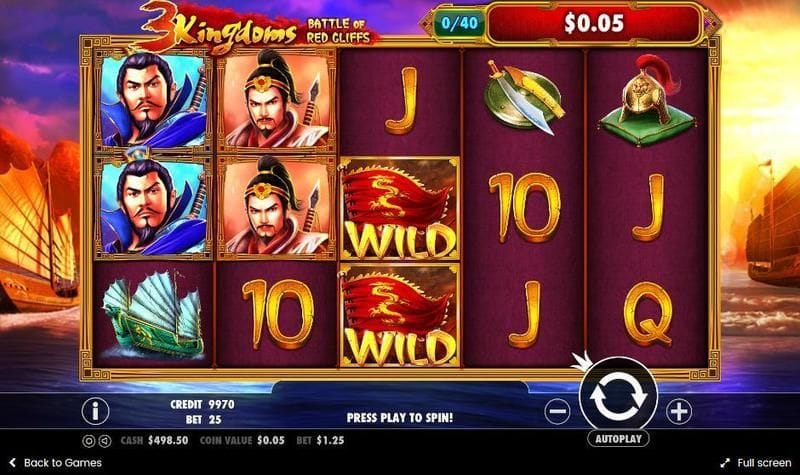 The unsurpassable aspect of the game is without doubt the exquisite graphics and finely tuned attention to detail shown in the design of the games characters Sun Quan, Liu Bei and Cao Cao. The graphics are striking and enrich the game to no end, with the flaxen blush of the sun setting over the ships on the horizon going hand in hand with the ships rocking on the sea face. The background is certainly the calm before the storm as the game itself entails a battle of wills and you’ll be hoping luck is on your side to conquer your adversary and claim victory.

If you enjoyed 3 Kingdoms - Battle of Red Cliffs, why not try Bonanza.