If you’re scared of creepy crawlies, then the Indian-jungle themed Adventure Palace from Microgaming might not be the slot for you. However, we would advise that you try to brave it as this jungle-themed five-reel, nine pay-line onlinebingo games won’t disappoint. As well as snakes, tigers and peacocks, look out for the Free Spins round which will award you 15 spins, each with a 3x multiplier. This is one of those games where the authentic sound effects help to set the ambience - particularly during the animated appearance of the scatter symbols. Although you’ll want to stay out of the elephant’s path if he starts rampaging, he’s also a generous guy, substituting for all other symbols (except scatters) and applying a 2x multiplier to any wins in which he appears. Try to check casino promos that you might be interested.

Despite the name there’s nothing small about Microgaming, one of the industry’s leading players since its inception back in 1994. Since then, Microgaming have amassed an unparalleled portfolio of more than 850 games including table games, sportsbook, multiplayer experiences and VR content utilising cutting-edge Oculus Rift technology. As well as leading the way in content, Microgaming also established a non-profit body (the Interactive Gaming Council) to advance industry interests and spearhead technological development. Gamers looking to get a taste of what Microgaming can do should give one of these titles a spin: Jurassic Park, Game of Thrones, The Dark Knight Rises or Thunderstruck. 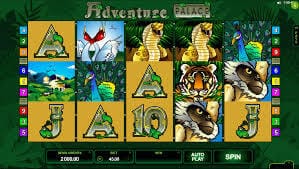 Adventure Palace is true to its name by taking its visual cues from all of the things you’d expect to see in the heart of the Indian jungle. Although lower value symbols are represented by playing cards (9 - A),they are entwined in tendrils, making them blend nicely with their surroundings.

Meanwhile, premium symbols include a cobra, tiger, monkey and an especially vain looking peacock. As mentioned, elephants are wild, substituting for all symbols (except for the Adventure Palace scatters) and have more than just junk in their trunk as they double all wins.

Spin three or more Adventure Palace symbols to trigger the free spins round. You will receive 15 free spins, each with a 3x multiplayer. 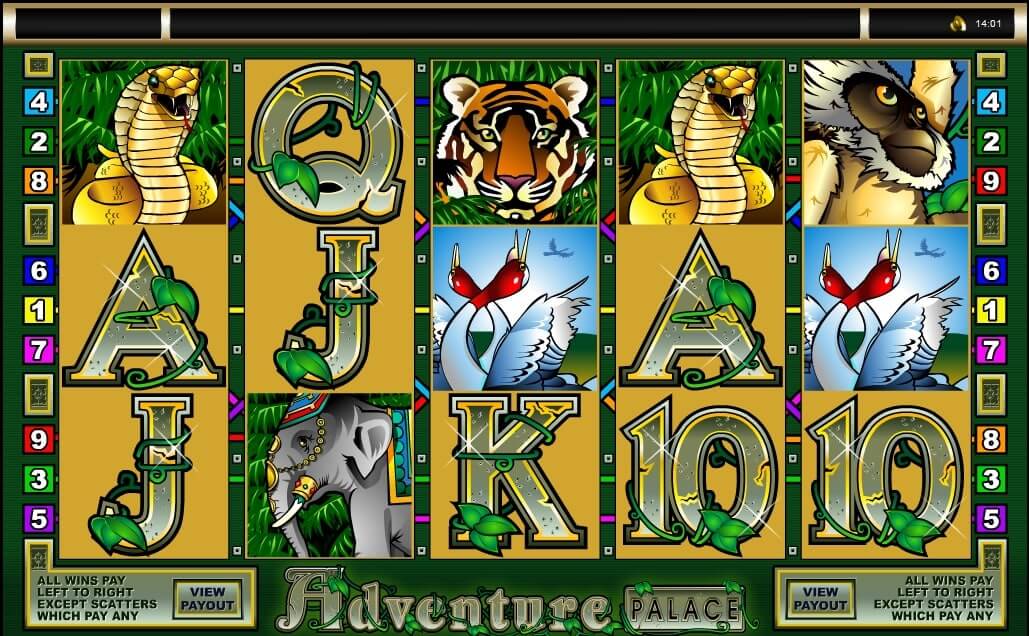 Adventure Palace from Microgaming is a vibrant take on a jungle-themed bingo games that showcases the veteran developer’s versatility. The animation is subtle yet entertaining (such as the blinking elephant), while the generous Free Spin round and double elephant wild up the ante. Although the Gamble feature will appeal to those who like to take serious risks for serious rewards, we would recommend using it sparingly if you want to emerge King of the Jungle rather than slinking away.

If you enjoyed Adventure Palace why not try White Rabbit?