Harkening back to the days of intrepid explorers and perilous voyagers, Age of Discovery from Microgaming brings the excitement of an expedition into a five-reel, 25-line UK online bingo slot games. There are many riches to be discovered in Age of Discovery, most notably during the Treasure Bonus. Spin three or more compass symbols and you will be transported to a secret treasure map in a ‘pick-a-win’style feature where you can make like an episode of time team and pick your digging sites. However, should you hit a skull and crossbones then the round is over, so watch out!

In the world of bingo games and slots industry 1994 is the deep and distant past, yet this is when Microgaming began blazing a trail in the industry. Some credit Microgaming with setting up the very first online casino (The Gaming Club) which signalled the developer’s commitment to innovation even back then. Those who prefer traditional casino games will find themselves right at home with Microgaming’s mammoth portfolio of more than 850 games, including roulette, poker, multiplayer, live dealer and VR games built-on Oculus Rift technology. Meanwhile, online slot players will marvel at the choice available from Microgaming, from licensed content such as Jurassic Park and Game of Thrones to original games like Mega Moolah, Immortal Romance and Untamed Giant Panda that they can play and enjoy. 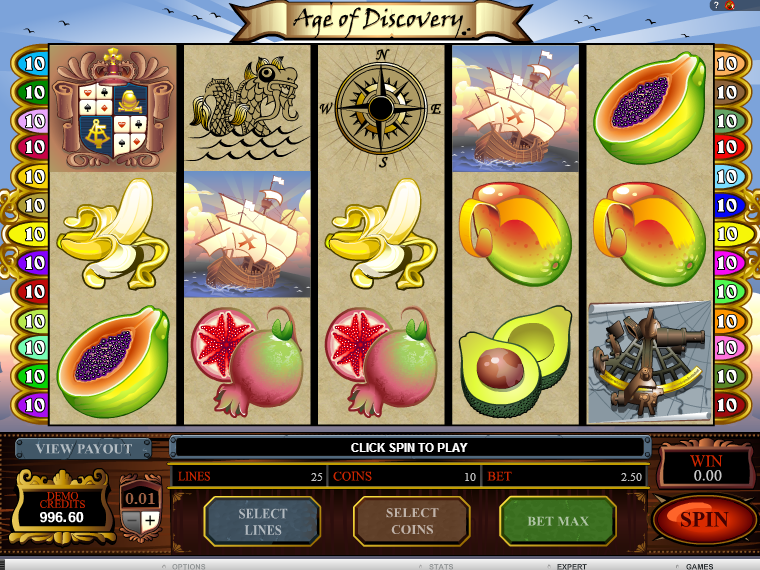 Set a course across the high seas with Age of Discovery, an adventurous online slot from gaming pioneers Microgaming. Lower value symbols are represented by some of the exotic fruits that sailors might have discovered in days of yore, including avocados, star fruits and mangoes, while premium symbols include your trusty ship, a sextant (kind of a olden days sat nav) and a coat of arms.

Look out for the golden coin which is wild, substituting for all symbols except for the compass scatter, three or more of which triggers the Free Spins round. 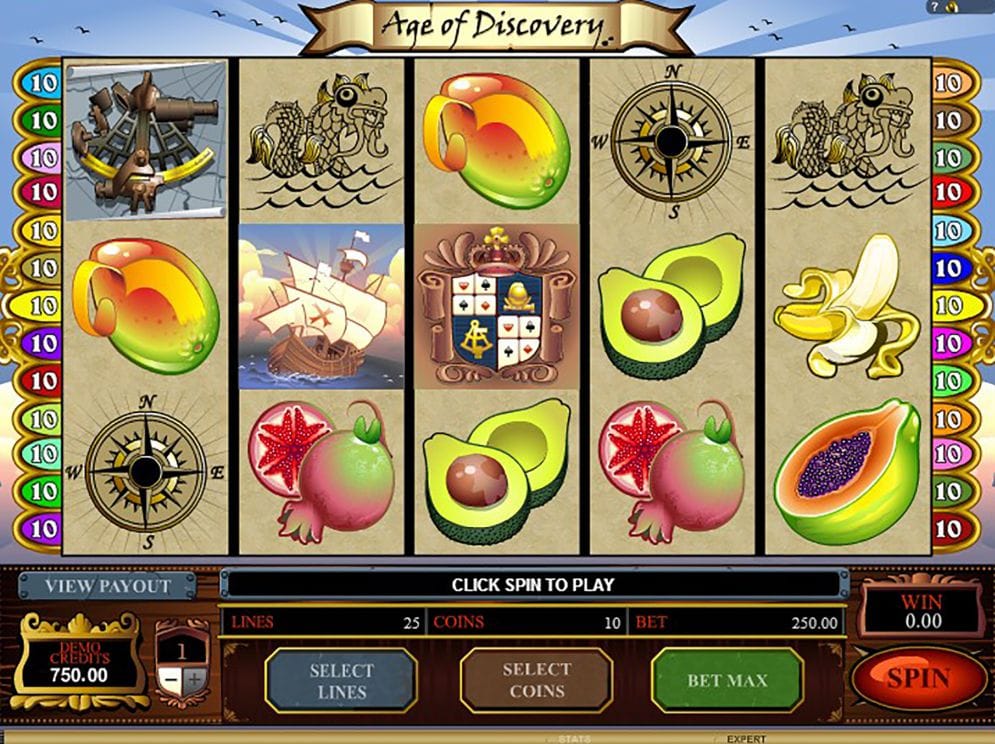 Spin three, four or five compass symbols to trigger the Treasure Bonus and try to find as much buried treasure as you can (remember ‘x’marks the spot!). Players can win up to 32,250 coins during this round.

Rustle up a crew and plot a course to cash prizes with Age of Discovery, a nautical exploration-themed online slot from gaming giants Microgaming. The theme is executed with aplomb in terms of its visuals and audio effects. Dig a little deeper and you’ll discover that this quality is more than just skin-deep as the Treasure Bonus gives travellers the chance to do what every explorer dreams of - dig for buried treasure. Age of Discovery gives gamers the chance to win up to 60,000 coins and caters for cabin crew and admirals alike with bets ranging from 0.25GBP to 250 GBP a spin! Shiver me timbers.

If you enjoyed Age of Discovery why not try Starburst slot?