But I don't want to go among mad people said Alice, well Alice why not welcome yourself back to sanity and play the Alice Adventure from the good folks over at iSoftbet! The original Alice in Wonderland was written by Lewis Carroll in 1865 and has not only stood the test of time as a story, but has threads running through modern-day pop culture in the process.

To influence others is the best kind of legacy one can lead. Alice Adventure is an adaptation done right, understanding the themes that made the initial novel so popular. We believe that this slot could influence other slots in the free bingo websites industry based on how well it takes an already existent idea and tries something new at the same time. You can also check for bingo promotions of Barbados.

“There is beauty in simplicity”: a statement that is so true to the craft of developers iSoftbet that it sets a precedent for other game developers out there to follow. With iSoftbet’s catalogue of games increasing everyday, it’s safe to say that iSoftbet will be around for years to come, creating the types of experiences you can only expect from a developer of this size and pedigree.

Everyone has their favourite character in this story, and don’t worry, most of the characters appear in this slot also in the form of the symbols. Alice, the Mad Hatter, the white rabbit and the Cheshire cat all appear here. Anyone who enjoys bingo games with a really strong theme will find similar ground here. Wilds, scatters, free spins and other bonus features, can all be found in this slot, adding new levels of reality one can traverse — similar to Alice — in hopes of finding madness in it all.

The design of this slot is one that lends itself to the cartoon genre. Every render is clearly set out in its path to create a sense of immersion, and trust us, you will be immersed. This is a 5 reel slot that plays over 30 win-lines. If players are looking at hitting the high notes in this slot, then they should be looking out for the Alice symbol, she is the highest paying symbol at play here, and will bag players a rather pretty penny. So pretty in fact that the Queen of Hearts has called for her head! 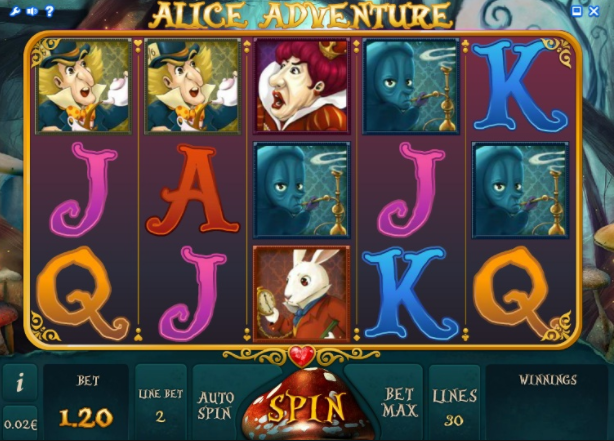 Alice in Wonderland is one of the most recognisable fables in the entire world, breaking boundaries across multiple cultures spanning the world wholeheartedly. The cast of characters in Alice in Wonderland have all found their own levels of success (we’re looking at you Cheshire Cat), but none have had the mainstream attention like Alice herself, and hence, we have this slot. There is a lot of instances and examples of games that have tried to capture the magic of the book, but many fail due to a lack of understanding. Alice Adventure is everyday a homage to the entire Alice world, a perfect adaptation if you will. Fun slot, fun premise. Play now.

If you enjoyed Alice Adventure why not try Starburst game?