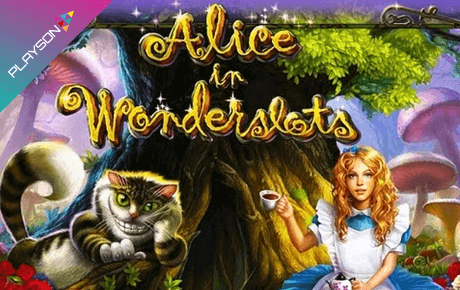 Alice in Wonderslots by Playson is a 5 reel and 20 payline slot. Fans of Lewis Carrol’s hit will love diving into wonderland where all the risks you take are cashed. Stakes start from 20p to £100 per spin. Enter this mystical wonderland and encounter some of your favourite characters in this online bingo.

Playson is a Malta based company formed in 2012. They’re quite new in the bingo games world, but they’ve managed to release some pretty cool offerings so far. They have slightly over 30 games available. The company is slowly growing with as many as 250 employees across the world. Playson has also established business relationships with a number of companies Bet Construct, 1X2 Gaming, Quickfire etc.

The company is having a growing reputation of producing quality graphics in their games. Playson specialises in HD gameplay to make the experience more immersive for slot players. With such quality, you can view sharp images and exciting 3D animations with the best clarity. The company has created a custom build service where its partners can customise games according to their own specifications. This means that an idea that starts off as a statement passed off could lead to a slot machine. Discover more amazing promotional games. 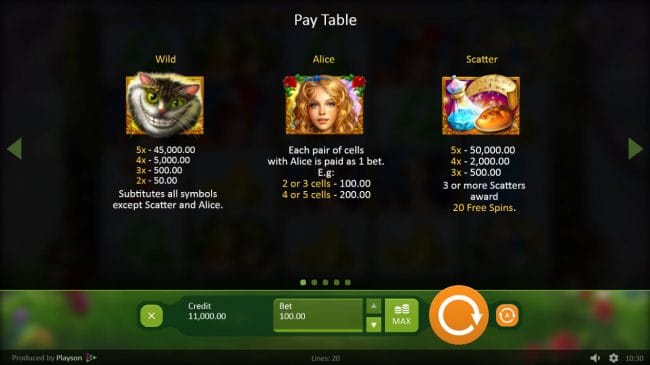 In true wonderland fashion, expect the unexpected here. Tread carefully for things are not as they seem on this journey. The graphics match the wonderland theme perfectly- you feel as though you’ve been transported to a tranquil forest from the start. The characters are depicted just as we’ve imagined them in our heads and in the same way they’ve been designed and replicated in films, cartoons and plays over the years.

· Wild symbol- Alice is the wild symbol – she expands into a higher rank symbol when she appears. This symbol can expand up to 15 slots on the screen. Look out for her on the 2nd from the top row. It’s possible to win up to 9,000 coins with Alice.

· Scatter symbol- The scatter symbol in the game is a big, flashy symbol indicated ‘Eat Me, Drink Me’. 3 or more of these reward 20 free spins.

· Free spins- Once the free spins start, you can double them if you land 3 or more scatters. This gives you a total of 40 free spins. The Alice wild also expands during free spins which leads to decent wins.

The Alice in Wonder slots game is quite good to look at with impressive graphics. The soundtrack creates that adventure kind of theme and flows with the game. The game has a high variance, so be careful on how much you’re willing to lose. It’s possible to win over 350x your stake during free spins thanks to the expanding wild. Improvements are being made to the slot on Odobo to make it a little lower variance with the focus being on entertainment. Aside from Alice in Wonderslots, there are other amazing games you can play and enjoy.