Spanning back all the way to the 1300’s, Amazing Aztecs is a slot based around the Mesoamerican culture that thrived in Central Mexico. But, for the purposes of the online gaming world, it’s been given a vibrant and fun makeover by Just for the Win and Microgaming.

This slot has a 5x3 gameboard and has 243 ways to win. Microgaming know how to give a slot that finishing touch and Amazing Aztecs is another one of their many successes. Trigger the Giant Re-Spin Feature for some incredible wins. Embrace the culture of the Aztecs today or play some bingo online.

Just for the Win is a new games development company that launched in 2016. Although they’re completely new to the industry, their vision has aligned with gaming development phenomenon Microgaming and resulted in their partnership. Microgaming developed the world’s first online casino in 1994 and have dominated the online gaming scene ever since. Creating new trends and dynamic themes is how Microgaming have made their name and excelled in such a competitive industry. With Just for the Win’s enthusiasm and Microgaming’s knowledge, their partnership will blossom. Give some more Microgaming titles and bingo games a spin, such as: 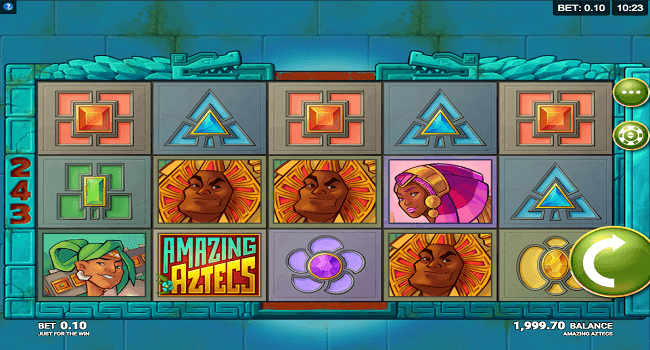 Greeted by beating drums and mysterious music, Amazing Aztecs introduces you to that post-classic period. The simplistic allows you to identify the pay table and what symbols you should be looking out for.

The symbols that return the lowest pay-outs are: Orchids, marigolds, lilies, hibiscuses and tiger flowers. All those symbols have an Aztec twist to their design. To hit bigger winning combinations, you’ll need to connect with higher value symbols, such as: Hunter, Shaman, Princess, Chief and Amazing Aztecs logo. Connect with 5 Amazing Aztecs logo symbols and you’ll receive a maximum pay-out of 10x your stake.

As for bonus features, Amazing Aztecs isn’t full of them, but the Giant Re-Spin Feature is good enough. Learn about the feature and how it can boost your bankroll:

To trigger the feature, a symbol must be selected on the middle reel to award a Giant Re-Spin.

The feature includes 2x2, 3x3 and 4x4 blocks of the specific symbol, which gives you bigger winning combinations.

This feature cannot be re-triggered.

Amazing Aztecs is an efficient slot with simple gameplay. There isn’t anything complicated about the design, bonuses or gameboard. Although this slot doesn’t have a Free Spins Feature, the base game and Giant Re-Spin Feature create plenty of opportunities to win big.

Aztec themed games are becoming more popular due to the unique twists that you can add to the bonus features. Just for the Win and Microgaming have developed a solid game that’s worth trying out.

If you're looking for some best bingo slots available, play World Cup Keno Slot right away.