If you watched both Finding Nemo and Finding Dory, this is likely going to be a Barbados bingo websites slot machine that wins you over from the title alone. Aquarium is an aquatic themed slot that brings with it the bright colours of the sea, but housed inside an easy to maintain aquarium. Swimming throughout its waters is an array of fish unlike what we’d usually see, which is arguably how Playson have made this title their own: with fruit fish.

That’s right. Instead of normal fish, Playson has crafted a 5 reels interface that has cherry fish, lemon fishes and other healthy delights. All of which bob along as they swim around the perimeters of the tank. In truth, it’s a cheesy concept, and one that isn’t quite on par with Playson’s usual 30 payline activities, and yet we can’t help but smile as we roll those reels.

Often what makes a company work is its experience coupled with fresh innovation, with most of the dinosaurs of the industry dying out because they fail to adapt. This is how you could describe Playson’s raise through the ranks: they started in 2012, combining their expertise with freshness, resulting in a six year strong iGaming label.

Just as you find with a lot of developers, Playson is based in Malta, often remarked on as the heart of the iGaming scene. This has been the company’s home since the beginning, though since 2012, Playson has taken steps to branch out and lay foundations elsewhere. They may still be compact in size, but they have many high profile games within their portfolio. Explore more enjoyable games on the list!

As we’ve already mentioned, there’s 30 paylines in total, with them all fixed into place, thus resulting in a wider variance of opportunities. Alongside this, you have the vivid aesthetics of the tank, where the fish spin on by in their various forms as you try to make a winning combination.

● Wild: We don’t always mention wilds, but when the paytable is minimal, we look to draw your attention to all extras. This fish will only land on the second, third and fourth reels, with it able to substitute all but the star.

● Star: Acting as a type of scatter, this icon can’t be affected by the dynamics of the wild symbol. However, it doesn’t offer free games either but rather pays independently of the winlines. 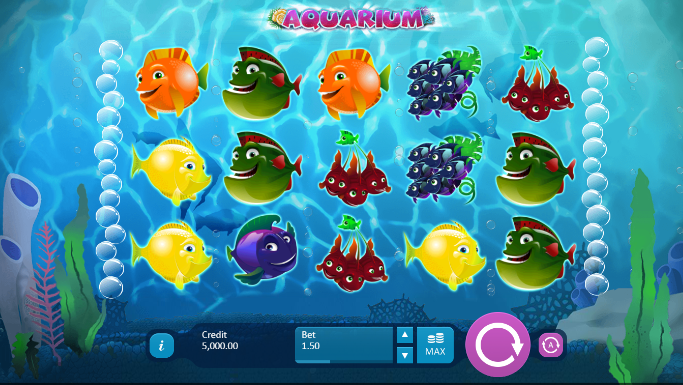 This feels like a small fish trying to be bigger than what it is, if we’re totally honest. The game features of this title feel far too underwhelming for this to ever be a big player within the community, with us feeling like Playson may have missed the mark here. Don’t get us wrong, it plays well, it just lacks variance and style. Get to play bingo games available!

If you enjoyed Aquarium why not try Starburst bingo game?