Jack and the Beanstalk

The classic tale of the peasant boy who enraged his mother by selling his cow for magic beans, but then, in a shocking twist, the beans turned into a giant beanstalk – which led to the house of the giants.

Transport yourself into the land of giants, magic beans, treasures and giant foliage in this Jack and the Beanstalk free bingo sites slot game by NetEnt.

NetEnt - About This Developer and Their Games

NetEnt is a Swedish games development company founded in 1996 that has become one of the most successful online game providers in the market. They offer popular live casinos as well as a huge portfolio of online slot games like Jack and the Beanstalk.

If you’re looking for more kids tale-inspired games try their Robin Hood game, or alternatively, any of their other slot games as they all have a good story behind them. Read more about them or better yet, try and play these games from Barbados. 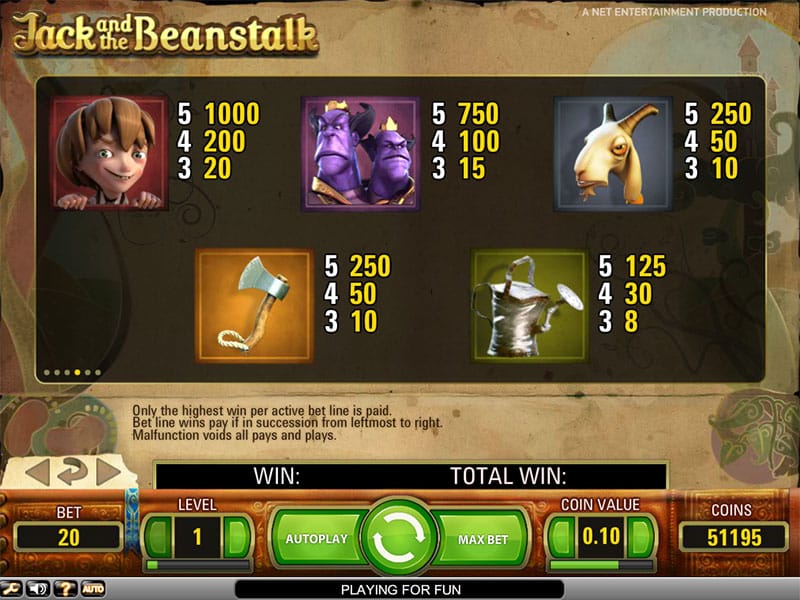 Playing Jack and the Beanstalk Slot - What to Expect

NetEnt has stuck to the roots of the Jack and the Beanstalk tale, setting the reels up in the garden of the house where Jack lived in the countryside with his mother, playing to a soundtrack of birdsong. The reels are decorated with various theme-inspired symbols such as Jack, the ax used to chop down the stalk, the watering can to water the magic beans, the goat (which maybe he sold in this version of the tale), the treasure, and of course, the giants. The lower value symbols are also made out of the beanstalk.

Wild symbol – the wild is the games logo and can trigger multiple features, and it substitutes for any other symbol on the reels except the scatter. It can also trigger the Walking Wild feature, where a respin will be awarded and the wild symbol will move one reel to the left each time. The feature will end when the wild eventually ‘walks’ off the reels.

Free spins – collect the golden keys that appear on reel 5 and unlock some other winning symbols. If you manage to find 3 golden keys the next wild symbol that appears will become stacked money symbols.

Collect 6 golden keys and the next wild symbol becomes 3 golden hens, and collect 9 golden keys and it’ll transform to an expanding golden harp wild, that’ll cover the entire reels. All of these extra keys and symbols will multiply your wins. 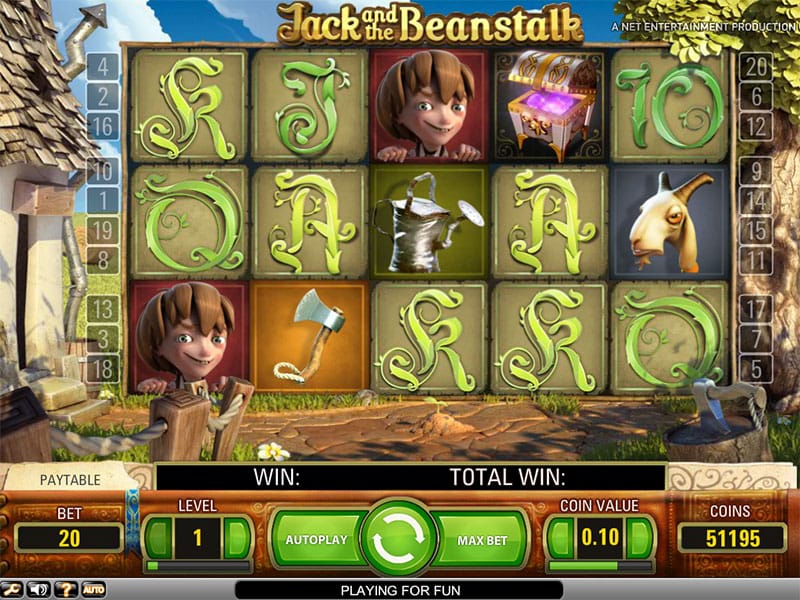 Our Conclusion on Jack and The Beanstalk Online Slot

A great little slot game that works perfectly with the Jack and the Beanstalk theme – the graphics are high-quality and the amount of bonus features and symbols within the game can make it a well paying, and interesting, bingo games.

If your looking for a forever romantic game setup, try Immortal Romance slot.