When you see a game from IWG (Instant Win Gaming), you should know to expect the unexpected.  Like Mayan Bonus and Mayan Legend, Super Cash Buster is a unique combination of an online slot and an instant win game that takes the best elements from both formats and fashions them into something unique.  Players will immediately notice that there are coloured dice instead of reels. Spin the dice to try and match the colours with coloured blocks in the Cash Buster Zone.  If you roll a match then these blocks and those nearby will be destroyed - and, if you’re lucky, you could win an extra spin. What’s more, players can win up to 20,000GBP.

With more than 10 years of bingo online UK industry experience, London-based IWG (Instant Win Gaming) have breathed new life into the industry with original, creative content.  While their name has previously been synonymous with online instant-win games such as scratch-cards (as well as lottery software), IWG has proved their mettle in the world of online bingo games too, with titles like Fast Buck Lucky, Crossword Cash and Mayan Bonus capturing the imagination of players all over the world.  Whatever your taste, IWG’s portfolio of more than 250 games has something for everyone, including fully-optimised gaming experiences for mobile and tablet users. Their games have amazing bingo offers no player can resist to try and play.

Super Cash Buster is a great looking game, with multi-coloured blocks displayed in the Cash Buster Zone on the right-hand side of the screen, and a pay-table in the centre.  Spin the dice to match the colour with coloured blocks from the zone to destroy them and work your way up the prize table.

If you roll the same colour as a block from the Cash Buster Zone then that block, and any adjacent blocks will be destroyed.  If you’re lucky enough to destroy an ‘extra roll block’ in the process then you’ll win an extra roll.

The prize table displays how many blocks of each colour you need to advance to the next prize level.  The more you stake, the more you can win at the lower levels. 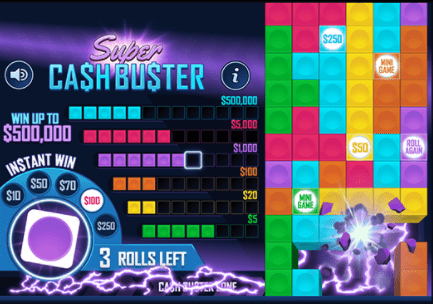 Super Cash Buster from IWG is another example of this developer’s commitment to creating innovative, entertaining products that stand out from the crowd, inviting players. Although the concept of amalgamating instant win games bingo with online slots sound out there, it works well and is easy to grasp once you start playing.  While the graphics in Super Cash Buster aren’t on part with the Mayan-themed games by the same developer, the concept of matching coloured blocks is strong enough to hold your interest.  With an instant cash prize of up to 20,000GBP up for grabs, you’re more likely to be looking at the prize table anyway!