The Eye of Horus slot machine game is another notch in the exceptional performance that Merkur has continued to deliver since its establishment.

The Eye of Horus game is a five-reel, 10 pay line video slot game developed by Reel Time Gaming and performing on the Merkur-powered platform that you can play here at Barbados Bingo, the best place for online bingo. This Egyptian- themed game, released in 2016, is one that is immensely popular among patrons of Merkur’s online casinos due to its appearance and the real casino action it provides players with. The old-fashioned theme fits the outdated design.

And even though it lacks a particularly great soundtrack, it's no sacrifice. Although the theme is that of Ancient Egypt, this game was dreamed up in Germany and employed a bit of German efficiency in the game. Although the game's design is not particularly flashy, it is still a refreshing game playing right to its themes as the symbols all have Egyptian connotations offering a classic gameplay.

The game takes place in a basic temple setting. There are columns on both sides of the reels along with the beginning of a temple ceiling above the reels. The columns are graphically enhanced but are not seen much because of the reels which have a papyrus look. The game is based on the myth of Horus, an Egyptian god born to Isis and Osiris, who was worshipped in the form of a falcon. Osiris, Horus' father, served as the king of Lower Egypt before he was killed by Seth, the Egyptian god of violence. Horus lost his eye in the battle to avenge his father. Another Egyptian god – Thoth, recovered his eye and turned it into a magical amulet representing good luck, health, healing, and protection to whoever wore it. Horus' eye is one of the most valuable symbols on the reels.

Merkur Gaming is a subsidiary of the German-based Gauselmann Group. The software company has many years of experience under its belt, making it a leading content provider of bingo games in the online gaming industry. The company was created through constant innovation and with its tradition that is dedicated wholly to the value of made-in-Germany quality standards, outstanding customer service. The company provides a broad gaming portfolio that is multi-faceted and is held to a higher standard than the rest of the games in the industry.

The company lives up to its motto of 'We Speak Gaming, ' providing games that transcend the language barriers. Solidly founded on innovation, passion, and tradition, the company produces world-class games. Merkur Gaming provides gaming solutions to numerous countries in multiple languages specific to players of that region. The easy to play slots are delivered in a wide variety and originality that cements the company’s reputation as one that caters for a broad range of players’ needs.

Many slot players have testified to the exciting gameplay of the company’s games with the captivating graphics and lucrative bonus twists. The style of slot packaging, bonus twists, and surprising titles show the company's focus on providing a safe and easy-going experience for all players. The games are in full HD – meaning whether or not you are playing from your mobile or PC, you will enjoy a clear and bright gaming experience when playing a Merkur game.

Some of their games include: 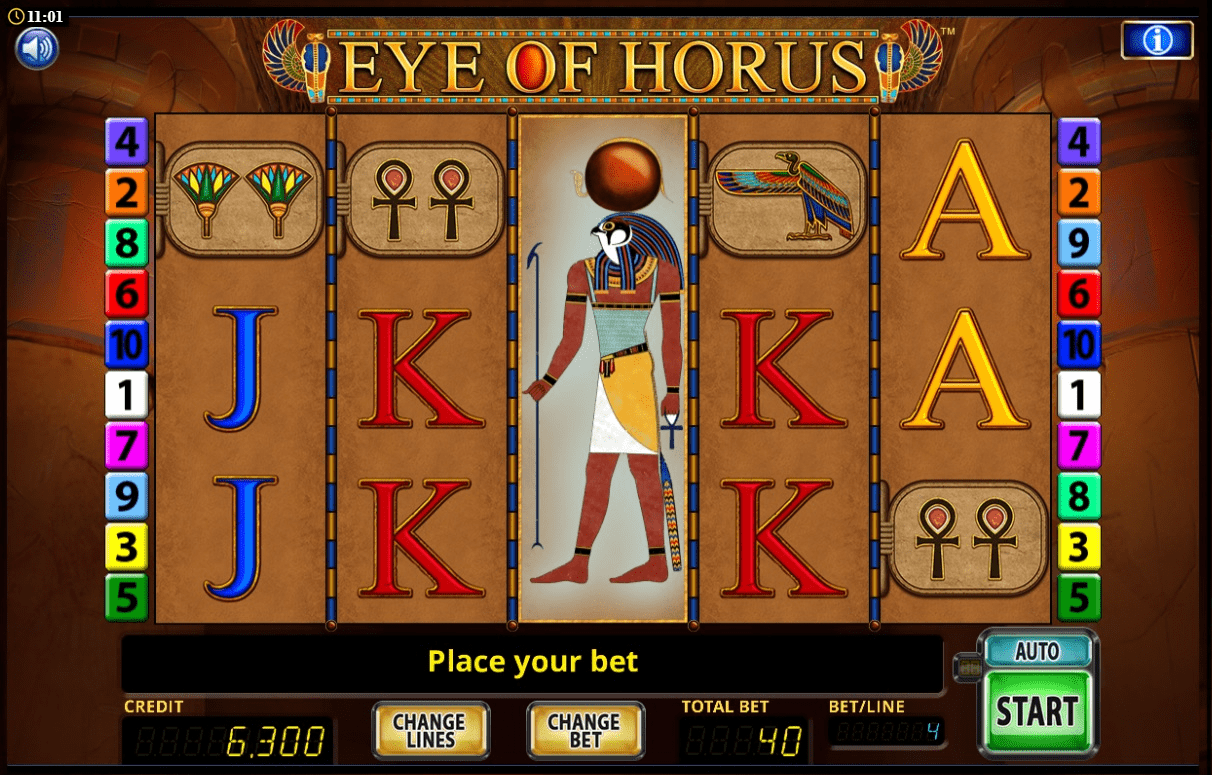 About the Eye of Horus Casino Game.

Horus is one of the most significant deities of Ancient Egypt, and his eye is the symbol of protection, power, and good health. The Eye of Horus is a video slot with five reels, up to three rows, and up to 15,625 chances to win. Pays are rewarded for three to five matching symbols on adjacent reels from left to right only. Pay symbols starting from the low end with the card royals from J through to A. They are complemented by Egyptian flower sticks, Ankh crosses, blue scarabs, Horus falcon, Anubis, and the Eye of Horus. In Egyptian mythology, the Ankh represents life, and the scarab stands for Rebirth. The game is simple enough that it can be quickly learned as it's being played, but for a feel of the game, players are encouraged to check it out in free play mode first. It has some practical ways to give you big wins if you have the patience to spin on the god’s reels.

Winning when playing this game is easy; players just have to get three or more symbols arranged from left to right. Each win is calculated after the reels have stopped. All wins are paid according to the paytable. All pays are for gains from lines played on reels read left to right consecutively. The biggest win will be paid for each pay line.

Simultaneous wins on different pay lines calculated together to give the final result. Also, free games can be won with three or more scattered symbols. The stake per line can be adjusted with the -/+ buttons on the stake coin. The maximum stake can be selected by tapping the MAX BET button. The stake is taken aways from the DEPOSIT account and displayed under BETS. Clicking the SPIN button causes the reels to start to spin, and a single game begins. However, clicking the AUTO START button causes the automatic start mode to activate. The number of games that are played during the AUTO START mode can be predetermined under options.

Like all Merkur-powered slots, the Eye of Horus slot machine is more suitable for experienced players as there will be a lot of dead spins. In every case, the possible outcomes are highlighted. This feature, in particular, needs to be used responsibly as there are chances of losing everything that has already been earned. The Eye of Horus is the most rewarding of the standard symbols. The chance to win an award of 10, 25, or 50 times your stake if you happen to land 3, 4, or 5 of these in combination is high.

The Eye of Horus slot game uses 10 adjustable pay lines, for a higher chance of winning, try to keep them all active. Players can wager between £0.01 and £1 per line, meaning that a total bet has a range of £0.10 to £100. The maximum win is ten thousand times your bet. The imagery is nicely done, especially the hieroglyphs, although the base soundtrack is generic and has the sensation of a brick and mortar casino slot, the theme is followed through.

The Return to Player rate is 96.31%, a percentage that is slightly above average when compared to other online games. A player always has a greater chance of winning 20,000 coins when betting a larger amount. Start staking with a smaller amount and select the number of play lines within your budget so as not to lose all your savings.

The maximum payout is a quarter-million, which is impressive for a slot machine as old as it is. It is even more impressive considering that the base jackpot is just 1000 for 5 scatters or Eyes of Horus. It is, however, advised that a player should quit playing for the day when a bonus round is triggered early on in a session. The highest payout is 500 times multiplier on your total bet. The lowest pay is a 5% increase in your total bet. To stand a chance at winning the maximum non-progressive jackpot is to place a maximum bet on all pay lines.

Eye of Horus is a game that can be played on your mobile device as it is a modern video slot game developed with HTML5. As a result, it can be played with a browser in seconds. This game can be played anywhere, taking you on an archeological adventure into the ancient world while you relax in the comfort of your home or on the move, and it always you to win big at the same time. One recommendation when playing the Eye of Horus is to stay within the limits of your budget.

Specify your spending for any given session and be sure not to exceed that amount set. Also, it is advisable to set a win limit so as not to get carried away with the wave of a winning streak, or you could start by placing small bets and increasing the size as the session continues. This way, the preceding loss would not be severe on your bankroll. This encourages you to spin longer to get more significant wins later in the game. For newbies, the free to play version helps build confidence and gather experience before going on to play for real money.

Final Thoughts on the Eye of Horus Video Slot

At first glance, the game doesn't look like it has much to offer. But once you trigger the free spins bonus and the wilds start landing on the reels, the significant payout potential that this game has started manifesting. All that is needed is one re-trigger and an extra bit of luck to get more free spins with the highest paying Eye of Horus symbol and a big payout on the player's account. This game mainly attracts players who have a real love for and fascination with ancient Egypt. The slot machine has been popular with fans since it came out because of its intriguing gameplay and features that allow players to line their pockets with cash. Although it is no progressive jackpot, that is not a reason to be discouraged as this game is definitely worth your time, especially for players that enjoy engaging with mystics.

With multiple winning ways, expanding wilds, and free games with upgrades, there is no end to the benefits of playing this game. Eye of Horus is a good game for fun and experience, also for new players wanting to find their ground in the online gaming world. The Eye of Horus is a low to medium variance slot, which means you should be expecting more frequent wins than high variance slots.

Sahara Nights Slot is another amazing game available at Barbados!