What have the fairies got waiting for you down in the woods? This enchanted online game is based in a magical world filled with fantastical beings who want you to join them in their fairy tale realm. They want to know if you have what it takes to win big. Thanks to the charming and bonus features, Goldwyn’s Fairies really does stand out from all of the usual casino slots!

Goldwyn’s Fairies is the debut game from Just for the Win. Set up just a couple of years ago, the company was created by seven professionals from the iGaming community who wanted to see how they would take to developing. Their hard work is certainly paying off as many UK bingo promo online casinos have highly anticipated this first game, and there are already a few more titles in development. Just for the Win are definitely some of the most dedicated developers out there at the minute, so it could be exciting to see where they end up!

Head down to the dell in the midst of the forest to find the fairies and their slot game. The game opens with some sparkling music that is inflected by woodland-inspired birdsong. You’ll be faced with a screen featuring a leafy background on which you’ll see the game board with its three rows and five reels. It’s then really straightforward – you just need to hit the button to spin the symbols and hope that matching ones align.  Colourful gems represent lower-value symbols while smiling fairies represent the higher amounts.

But that’s not all, though. There are also plenty of great bonus games to entice you further into this magical game:

• RE-SPIN – If you are lucky enough to score a fairy symbol on the third reel, you will activate the re-spin feature. This means that the fairy symbol will become a Wild and you’ll get a free spin. Hopefully, you’ll get another re-spin Wild on this free go as it will grant you one further freebie.

• RETURNING WILD – Whenever you spin a Wild, it will be clearly marked by a circle. Once you’ve had your final free spin, the Wild will disappear. However, with a Returning Wild, you’ll see that every marked item will turn into a Wild as well, so you have a much bigger chance of winning.

• FREE SPINS – If you manage to score three of the scatter symbols you will receive nine free spins. Should you get another free spin Wild during these bonus rounds, it’ll remain marked until your final free spin. 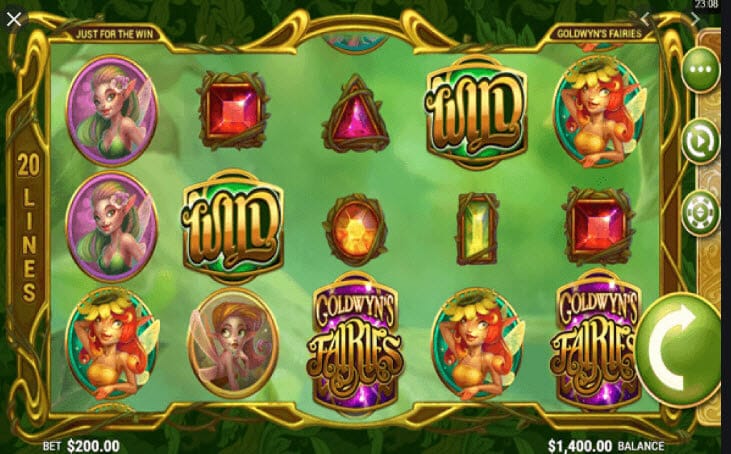 The gaming fairies have truly blessed this slot with their powers as there is a good chance of winning big here. That’s largely down to the great bonus features, which will tempt all slot lovers to keep coming back for more.

This simple game will capture the imaginations of both new and experienced gamers, and the serene fairy inspired the design of the game will certainly tempt a broad range of players to give the slot a go. You can also check for a list of our best bingo games to play!

If you enjoyed Goldwyn's Faries why not try this Barbados online spin and get big wins!