Gemtastic is an online slots game that was developed by British gaming company Red Tiger. There are six reels, five rows and 30 fixed paylines of action on offer to players, and plenty of chances to win large prizes. The setting for the game is some kind of underwater cave, with the reels floating n the foreground.

If you are a fan of playing bingo UK online you will probably be familiar with the iconic tiger’s head logo of Red Tiger Gaming. Based in the UK, on the Isle of Man, Red Tiger was founded in 2014 by a group of gaming experts and business people from Asia and Europe. Over the course of their short, five-year existence they have established a reputation for producing high-quality games. The HTML5 framework that is deployed in many of Red Tiger’s games means that they can use HD graphics. It also means that the games can be played on a wide variety of devices with different sized screens.

Other innovative features that are often used in Red Tigers’ games include such concepts as ceiling jackpots and daily jackpots, which are useful for both casino operators and players. Other slots and games bingo from Red Tiger include these titles:

The watery cave in which the action of this game is set would also appear to be volcanic, as streaks of fire occasionally appear on the screen during the action. The sea is deep blue, which gives the visuals quite a relaxed feel at times. Given the game’s name, it should surprise no one too much that gems are used as the symbols on the reels. These gems can be red, green, blue or yellow, and they can fill more than one space on the reels. The gems can expand to fill 2x2 and 3x3 spaces, which is important when it comes to creating winning combinations.

The wild symbol is pretty straightforward to spot, as it is the letter W displayed on a multicoloured gem. This symbol can replace any other symbol on the reels to create a winning combination for you. The quirk in this game is that wilds do not simply spin on the reels, though. Unlike in many other games found in a UK casino the wilds have to be created by the player using the Magic Glow feature. This is triggered when the symbols on the reels have a mysterious glow around them. 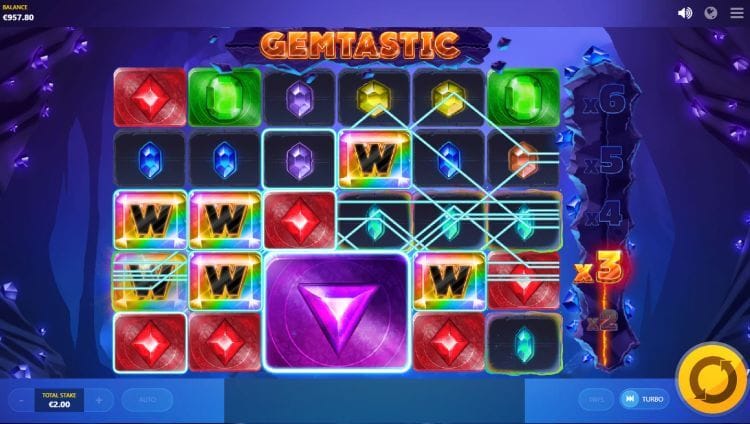 If you like playing fruit machines online then you will find plenty to enjoy in Red Tiger Gaming’s Gemtastic. There is no theme or storyline populated with characters like Puss in Boots or Indiana Jones to drive the action along, but that does not mean that there is not plenty of fun to be found in this game. The graphics are sharp and the gameplay is slick and smooth.

King Kong Cash Slot is another popular title that can be accessed today at Barbados Bingo.