Have we landed on the Las Vegas strip or in the rainforests of Brazil? It looks like these two worlds collide in Neon Jungle as palm trees and the animal kingdom have been given a luminous upgrade! The electro soundtrack might even think you’ve somehow ended up in Miami Vice! No matter where you actually are, though, this tropical play online bingo game is ready to pay out its jackpot – will you get lucky when you rumble in the jungle?

Iron Dog Studies may only be a small brand owned by the mighty 1X2 Network, but they sure know how to pack a punch with their games! And that’s exactly the case here with the Neon Jungle slot. The sleek animations and soundtrack are everything that we’ve come to expect from this exciting group of developers. As ever, they’re one step ahead of their competitors by bringing out a game that’s at the cutting edge of slot games. They’ve also mobile-optimised the game, so you can start spinning on your desktop or tablet device. Now that's convenient if you can play now or anytime! 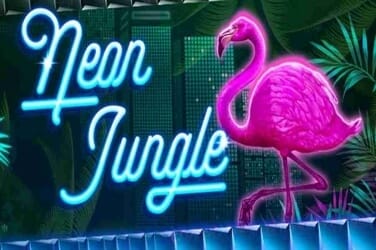 Welcome to the jungle! Things might not be as you would imagine, though, as the animals and scenery have been turned fluorescent. Rio de Janerio’s iconic tower blocks are in the background of the game and have been brightened by all the colours of the rainbow, while neon flamingos are just some of the Amazonian jungle locals who’ll greet you throughout the game.

There’s also a lot of jungle imagery in the actual gameplay. Of all the symbols that could appear on the five reels, letters of the alphabet represent the lower values. When it comes to higher values, you’ll see various wildlife, including butterflies, parrots and little frogs. You need to try and attract the lions, though, as these are the most valuable. Don’t forget there are also some nifty bonus features that can help you win big too.

• WILD SYMBOL – A cheeky monkey represents the Wild in this game. It replaces all symbols except from the other special ones. When that monkey appears, you’ll notice your chance of a win increases!

• SCATTER SYMBOL - The Scatter is a purple snail and when he crawls onto a symbol, you’ll get a free spin. If three of them turn up on the board, you’ll activate the extra Neon Jungle feature. This gives you the chance to get six free spins. The glowing circle symbol is another Scatter and can increase your winnings by four times.

• BONUS ROUND – Spin a pink flamingo and you’ll get whisked away to a bonus round of keno. Winnings could be anything between fifty to 20,000 game coins! 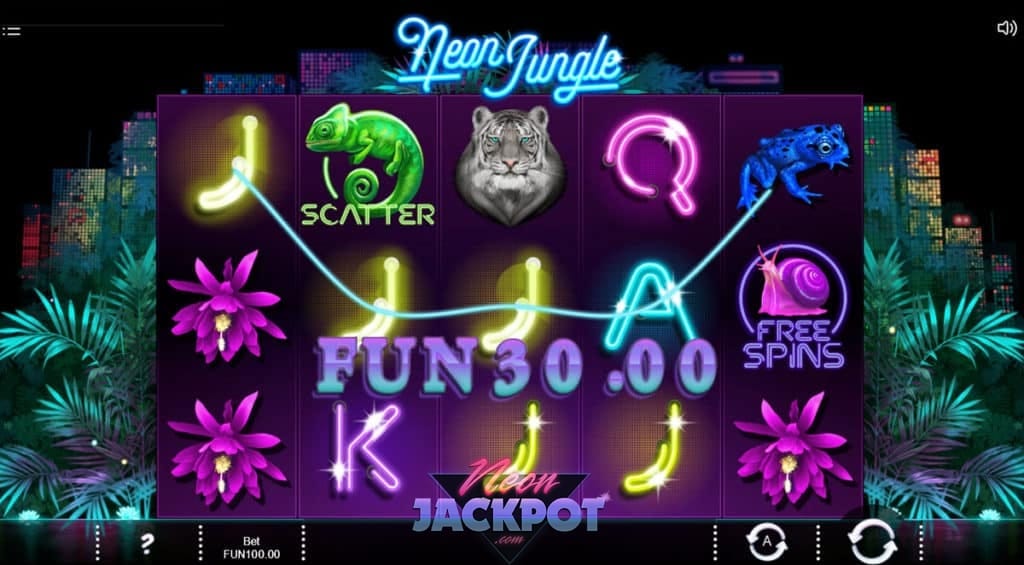 Who’d have thought a neon jungle would hold up so well as a slot game?! It may be one of the more simpler bingo games free and slots out there, but the appealing theme and unique graphics add up to a very enjoyable and appealing game. Thanks to all the extra features and plethora of opportunities to win, your visit to the jungle could be a very profitable one!

If you enjoyed Neon Jungle why not try this Barbados slot game too.