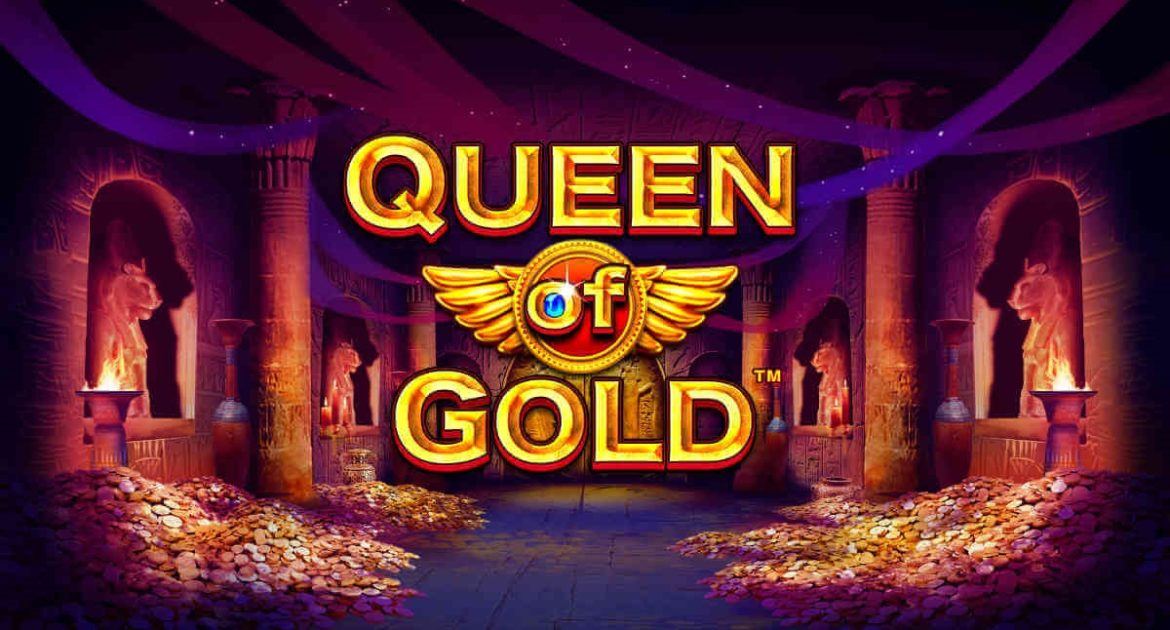 Cleopatra, coming at ya! Immerse yourself in a golden Egyptian paradise in this shimmering slot. You’ll be mesmerised and seduced by the beautiful Queen Cleopatra as you watch her, and other Egyptian Gods descend on the reels. The reels of the game are extravagant and decadent with the reels being framed by slabs of gold with beautiful royal blue. The reels are set against a background which looks out onto the golden desert, the deep blue river Nile, flaxen pyramids and a bronze a sunset.

This majestic game is brought to you by the prestigious Pragmatic Play, one of the most rapidly growing onlinebingo casino game developers. Pragmatic Play creates digital casino games for the online gaming industry and strive for excellence. They will stop at nothing to create the most evocative and engaging games on the market.

Try these other stunning slots by Pragmatic Play: 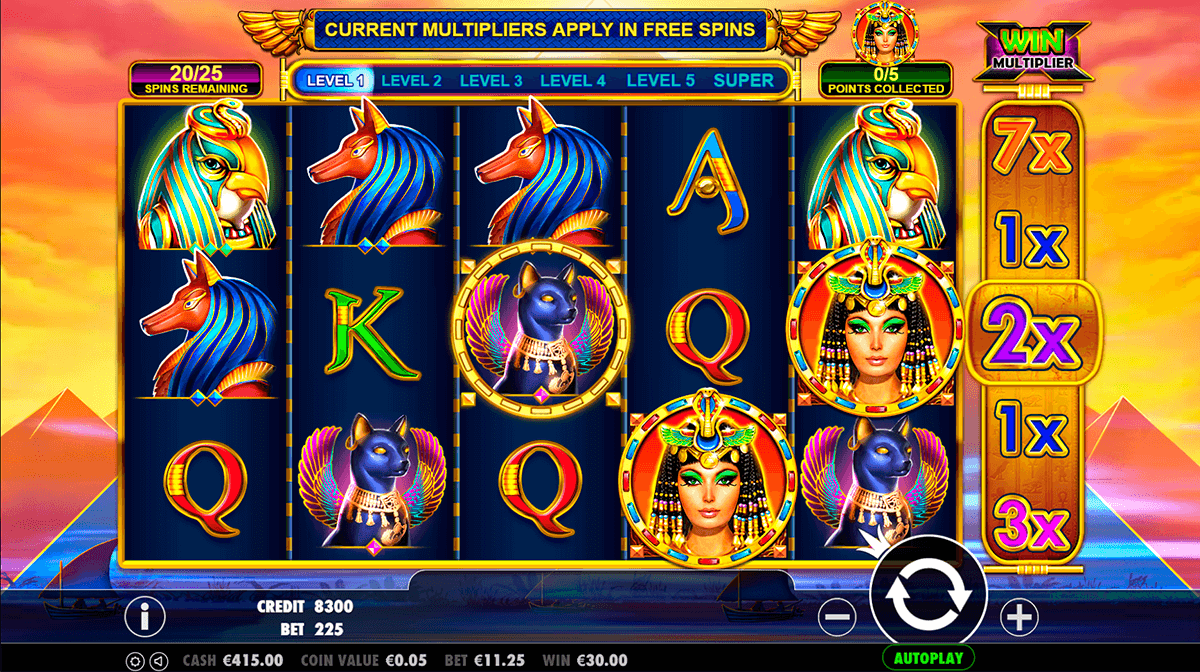 Queen of Gold is a 5-reel slot game with 25 paylines and is inspired by the beautiful historical Queen Cleopatra and Ancient Egypt. Keep your eyes peeled for the Queen of Golds Wild symbol which is the almighty Pharaoh which can be used as a substitute for any other symbol on the reels except for the Bonus. Watch out for the mysterious royal Blue Pyramid as it is the games Scatter symbol which means that if you are fortunate enough to land 3 or more on the reels 1, 3 and 5 the Free Spin feature will be put into motion! Once this exciting feature has been triggered, you will be granted 10 free spins with the thrilling opportunity for the feature to be triggered an unlimited amount of times!

There is a highly sought after Multiplier reel in this game which is the 6th reel and contains win multipliers as well as a unique Joker playing card symbol. After each spin, one symbol is randomly chosen on the 6th reel. In order to progress throughout the game you will need to collect points throughout the 6 levels of the game. You are able to collect points by hitting the Cleopatra symbol and selecting cell on the reels. You can tell what your current selection is as it is highlighted by a golden ring. Each hit equates to one point and you will require 25 points in order to progress to the next level or alternatively you can hit a Joker playing card Symbol on reel 6. 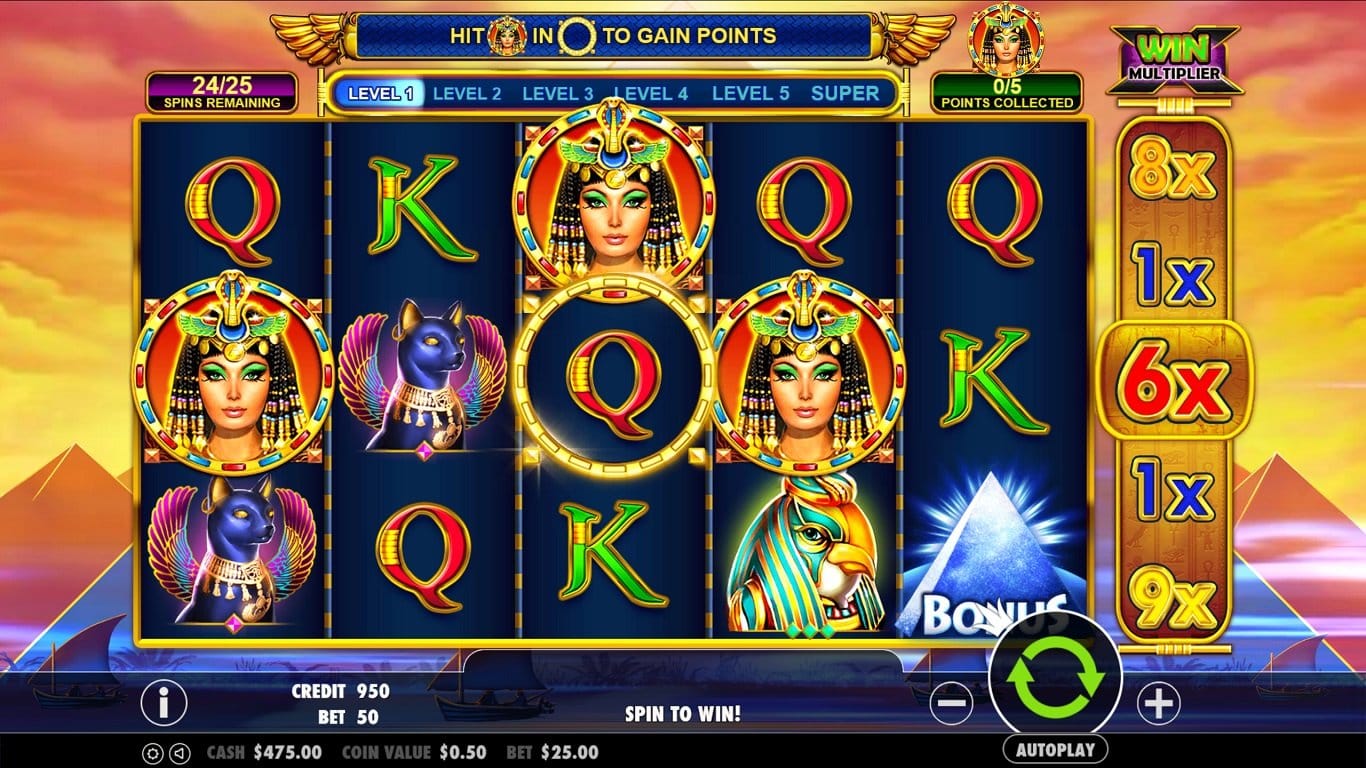 Players love this game as the visuals are simply stunning, as well as the gameplay being stunningly simple. As well as the beautiful graphics and exciting features to keep you entertained, the game is easily customisable as you can choose your coin size anything from 0.01 to 0.50. If you’d rather sit back and watch the resplendent sunset over the pyramids and the glistening river Nile as you play, you can opt for the Auto-play feature, which allows you to set the number of time you would like the reels to spin without interruption. Once you have placed your bets, with the simple press of the Play button, you can watch in awe as the reels are set in motion. Try your luck in playing online bingo games and who knows, you might win the biggest prize!

If you enjoyed Queen of Gold why not try this Barbados casino bingo game.