Reptoids is an alien-themed UK online bingo slot by Yggdrasil featuring amazing 3D graphics and plenty of bonus features and progressive jackpots. The slot has 5 reels and 20 pay lines and is compatible to be played on all desktops, tablets and smartphones. Players can bet as little as 10p up to £100 per spin to try to win an impressive 5000x your stake up for grabs.

Yggdrasil is a software company specialising in superior online and mobile casino games. Based in Malta, they have successfully emerged into one of the most successful companies even though they were the underdogs and provide games to some of the biggest operators in the world. Having only received their license in 2013, they are one of the latecomers to the scene however they have made up for this with high-quality games and have gone on to win innovator of the year and slot provider of the year in 2017. Experience their games via bingo promotions and discover how to win more. 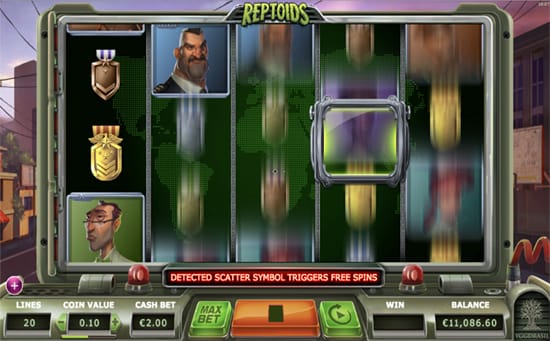 This sci-fi alien themed slot gives players the chance to enjoy some unique themed gameplay with exciting features proving hours of entertainment and opportunities to win. The theme of the slot is ‘aliens in disguise’ in the 1960’s and so the game has a great old style feel to it.

Following a left-to-right playing style, players need to land matching symbols to win prizes, with a potential of winning up to 500,000 coins.

The feature ‘alien detector field’ helps players look for aliens that are hiding, finding these could give you wilds on your reels. The symbols for this slot includes police officers, nurses, scientists, reports, general members of the public and presidents, as well as money, bronze, silver and gold military medals. The lowest rewarding symbols are the money and medals. The president is the best symbol and can give you x50 your stake when you land 5 in a reel.

The unique ‘repoto doctor’ feature is a frame that moves to a different position on each spin. The character that lands in the frame on each spin will become wilds and substitute all other symbols other than the scatter to help create winning combinations. Detecting 2 reptoid aliens will get you 2 additional sins and uncover all the aliens and you’ll receive an extra 6 spins. This means there is a potential of 13 spins to be won in this slot. 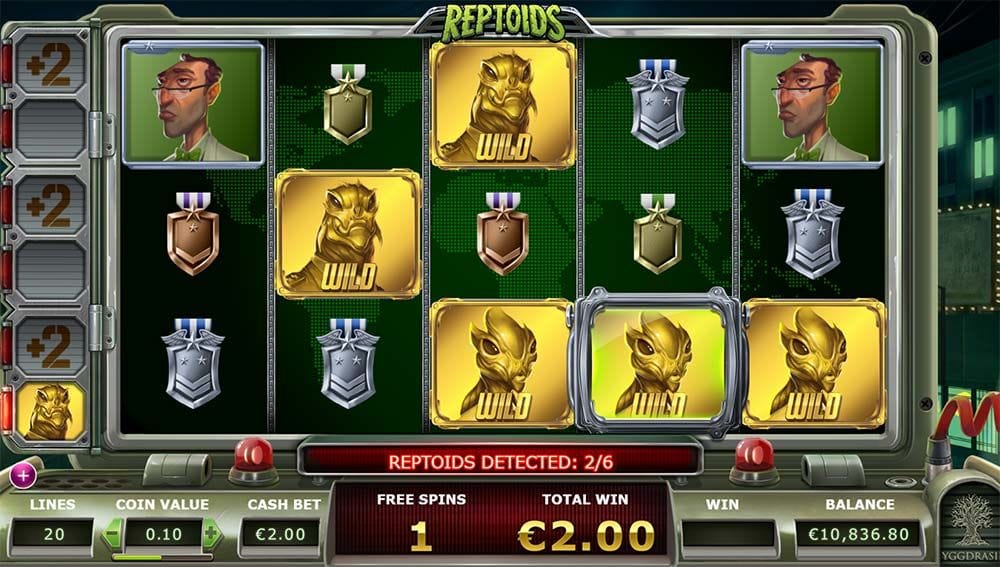 If the theme isn’t tempting enough, Reptoids has a potential of rewarding x5000 your stake in the standard game if you land 5 scatters. There are also plenty of bonus features and potentials making this slot by Yggdrasil and can be considered as one of the many online slots available in the market. Try your luck in playing bingo games and who knows, you might win the biggest prize!

If you enjoyed Reptoids, you should try this slot game - Chilli Heat too!