Welcome to the land of Ancient Egypt and dare to enter the temple of Ra to seek the ancient treasures within. Let the hieroglyphics of the reels lead you to the jewels and gold that lie within this online UK bingo game. If you love the ancient Egypt theme you will adore this simplistic slot, with its bejewelled letters, inscriptions and Ra himself making an appearance on the scrolls which are made from ancient papyrus scrolls. The audio is appropriately themed to the game and immerses us more deeply into the Egyptian sands.

iSoftbet create high-quality Barbados online slot gaming solutions using impressive HD graphics. This fast-growing company is impressing the industry with the entertaining and engaging games they have been producing time after time. They aim to create, develop and deliver the highest quality best bingo game innovation engaging and inspiring players. The company has an extensive portfolio of over 400 games and they have something to offer every player. iSoftBet are certified in Italy, Spain, Belgium and Alderney and the UK and are based in London. The Scrolls of Ra is a great game that highlights the talents of this gaming developer. 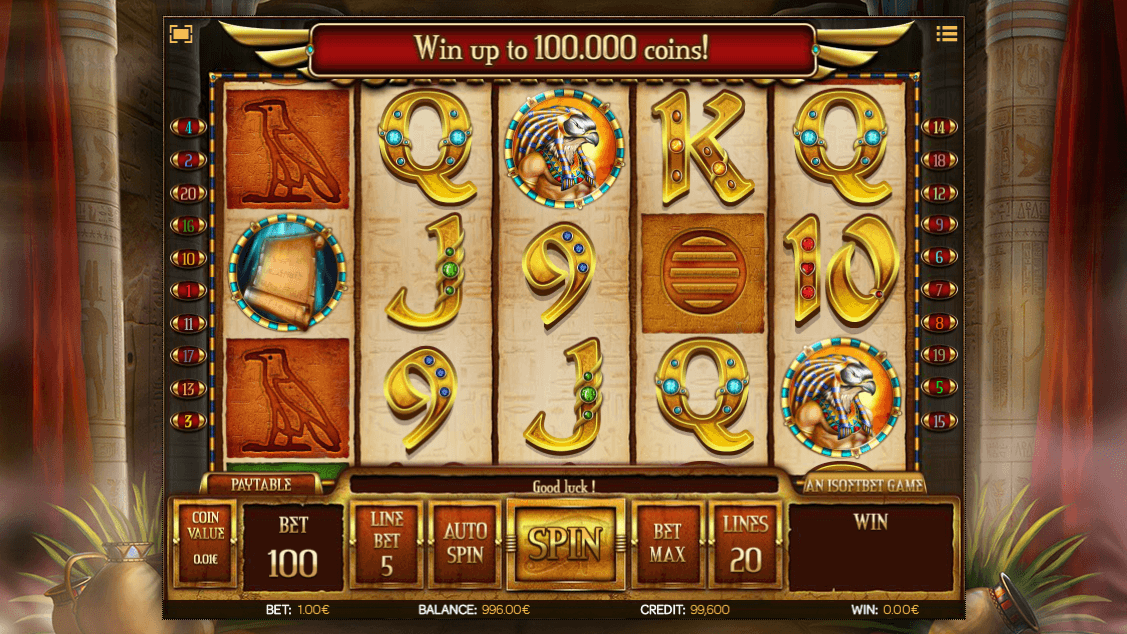 Ra was the sun God of Ancient Egypt and was known as the King of the Gods by many. Ra is the most powerful of all Egyptian Gods and ancient scripts describe him as the creator of all. The ancient Egyptians worshiped Ra more than any other god and pharaohs often connected themselves with Ra aiming to be seen as the embodiment of the Sun God on earth. Ra was generally depicted in human form with the head of a falcon, crowned with a sun disk although he could also take the form of a serpent, heron, bull, lion, cat, ram, hawk and phoenix among many others.

Take on the mighty Ra yourself and learn to play Scrolls of Ra:

WILD SYMBOL: The wild symbol in this online slot game is represented by the Eye of Ra symbol and it replaces any symbol except the scatter symbol or the bonus symbol. When located in the centre of reels 2, 3 and 4 that reel becomes wild and awards 5 free games.

SCATTER SYMBOL: The scatter symbol in this online slot game is represented by the game Scrolls of Ra icon. The scatter pays anywhere on the reels and wins are multiplied by the line bet.

• Ra Bonus: 3,4 or 5 Ra bonus symbols anywhere on the reels will activate the bonus. Choose 3 treasure chests from the temple and claim your prize.

• Scrolls Bonus: Scrolls bonus symbols on 1.3 or 5 at the same time will activate the instant bonus. Select one of 3 scrolls to win a prize of up to 10,000 coins. 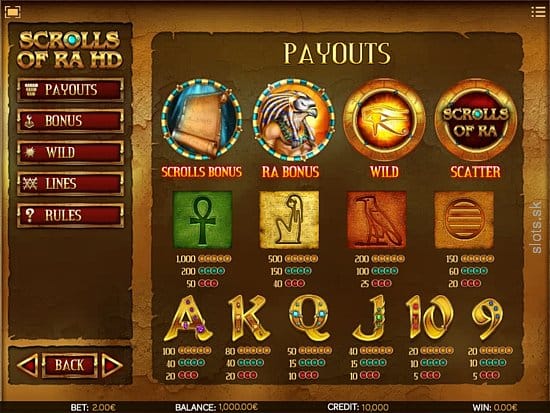 This online slot game is one for the ancient Egypt theme fans. The bonus games make the game more exciting and it is very easy to play, with engaging music and big wins to be had.

If you enjoyed Scrolls of RA why not try Fluffy Favourites slot game.