The changing of the seasons are gorgeously celebrated in this visually arresting and wonderfully animated online slot game from Yggdrasil Gaming. The simplistically titled ‘Seasons’ has a stunningly drawn woodland grove as its setting, with different HD quality weather animations to enjoy as summer, autumn, winter and spring come and go.

Renowned for their innovative game designs, software developers Yggdrasil have once more produced a cutting-edge 5 reel slot game. From the lush imagery to the pleasant music, this game is a treat for the senses. Not to mention, with the game's accessibility and mobility, there's no limit on where to play online bingo.

The shifting weather of the countryside is the theme for this five reel slot game with three rows and twenty fixed paylines. The minimum available bet is .20 credits per spin, the max is 40.00, and there is a 60,000 fixed jackpot. There is a different game screen for each of the four seasons, which changes after every 10 spins, and as well as providing a beautifully animated new background each screen provides a different game mode with different extra wild features:

Autumn: The Fox Wild arrives in Autumn to provide multipliers. The more Wilds awarded the higher the potential multiplier, up to a maximum of 10x.

Winter: In this season, the Hare Wild will replicate itself and move to the position in the reels which will be most likely to create the winning pattern.

Spring: In Spring the Owl Wild arrives as a fixed Wild who delivers a re-spin. As the reels spin, the owl moves one position in any direction, and continues to give re-spins as long as he remains in view.

Summer: As summer arrives, the Deer Wild arrives with it. The Deer Wild expands to create a cross-shaped selection of wilds. 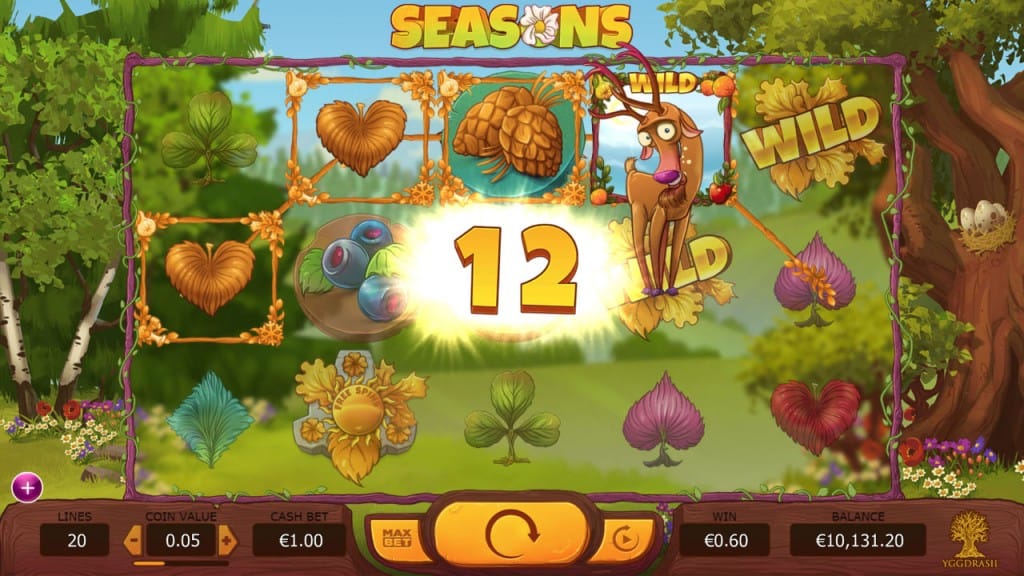 Since receiving their first license in 2013, Yggdrasil Gaming has emerged as one of the industry’s most respected and acclaimed suppliers, providing free bingo games for some of the world’s biggest operators. The winner of 5 industry awards, including ‘The International Gaming Awards 2017 Winner of Innovator of the Year’, ‘EGR B2B Awards 2017 Winner of Slot Provider of the Year’ and ‘The International Gaming Awards 2016 Winner for Gaming Software Supplier of the year’, Yggdrasil have developed over 40 online games alongside a reputation for quality and innovation.

If you enjoy playing Seasons, then it is highly recommended you try out some of the other Yggdrasil Gaming titles, such as:

No shortage of bingo offers for players to win big prizes!

Seasons is a hugely fun slot game to play! Not only is it beautifully presented – with the kind of high-quality animation designs that would make Pixar jealous - it has some highly enjoyable bonus features. What’s more, it comes with an RTP of 96.10%. Try your luck in playing online bingo games and who knows, you might win the biggest prize!

If you enjoyed Seasons why not try Fluffy Favourites online slot.