Rabcat Gambling - The Developer of the Sherlock of London Slot

Rabcat Gambling has been in the iGaming business since 2001. The company is headquartered in Vienna, Austria. The company has had amazing output over the years. They tend to produce fun, dark and brooding gambling games. Their slots make use of progressive elements in gameplay.

Rabcat products tend to be high quality with the largest and best known gambling corporates integrating them into their online casino platforms. You won’t need to download any Rabcat games because they work seamlessly in the browser window. Some of the online casino sites that offer Rabcat slots and bingo game online include Next Casino, Casino Luck, etc. 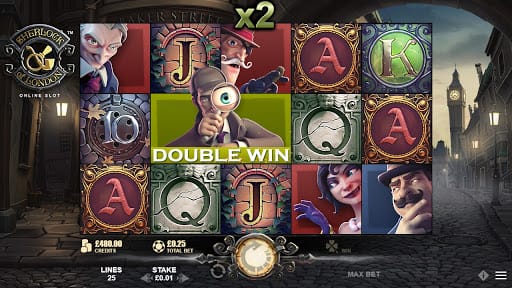 About the Sherlock of London Casino Game

Sherlock of London has a well done design with the action set in the streets of Victorian London with symbols on the reels including card values A to 10, stars of the show Irene Adler, Dr Watson, Moriarty, 221B Baker Street and Inspector Lestrade. The best among them is the 221B Baker sign. When 3, 4 or 5 land on the reels, players will win 0.8x, 8x or 40x your total bet. That’s the same payout offered when the wild symbol lands. It’s represented by Sherlock himself. The wild can replace all the other standard symbols.

Dr Watson can act as a second wild during the free spins. It doesn’t activate extras, but can replace all other standard symbols. You can also reactivate the feature and receive 10 extra free spins so 20 in total.

Final Thoughts on the Sherlock of London Video Slot

Sherlock of London is an interesting take on one of the most famous crime investigators in the world. There’s a great range of extras offered here and the slot volatility lies in the middle with the best wins going over 2,000x a stake on every spin/bonus spin/free spin. Rabcat Gambling's Sherlock slot will cater to your slot needs whether you’re into famous detective stories, classy design and interesting extras.

Barbados Bingo offers numerous games like this, such as Return of Kong Megaways Slot.