NetEnt has proved once again that they like to stay one step ahead of the game, as evidenced in Steam Tower, a steampunk-inspired slot that isn’t full of hot air. Steam Tower is a five-reel, 15 pay-line game planted in the centre of a yard and surrounding by gears, cogs and all manner of engineering parts. Standing proud next to the game-board with his slightly scary-looking grappling gun is the old-fashioned gentleman protagonist, a hirsute fellow who will later scale the steam tower to bag cash and multipliers. As well as offering a jackpot of 1000x your stake if you make it to the 16th floor, Steam Tower also boasts a stratospheric RTP of 97% with exciting online bingo bonuses.

NetEnt are a Swedish online games developer who began life as a three-person business and have rocketed into one of the largest and most innovative developers around. Now boasting more than 200 games - including multiplayer, table games like poker and blackjack and industry-leading online video slots, NetEnt entertain gamers worldwide, also translating games into some 20 languages. Their titles range from the wild and wacky, like Finn and the Swirly Spin, to action-packed blockbuster inspired games such as Planet of the Apes. Check out some of their cool games at Barbadosbingo.com. 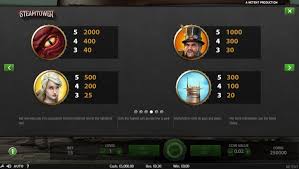 Steam Tower features stunning visuals combined with the metallic sounds of industry. The lower value symbols are represented by playing cards (from J to A), but each is rendered in a heavy industrial style to ensure they are in-keeping with the theme. Premium symbols are characters and objects plucked from the narrative of the game itself, including the tower chimney, a pallid damsel and our moustachioed hero.

Special symbols include a stacked wild of the main character and his grappling gun which is also wild. Both wilds substitute for all other values.

Spin a complete stacked wild figure to trigger the Free Spins. You will be initially be awarded 10 free spins to begin your journey up the tower to save the damsel. If you spin a grappling gun wild then you will advance to the next level of the tower and receive two more free spins. As you ascend the tower you pick up further multipliers and cash prizes. Make it right to the top of the tower (the 16th floor) to claim a massive 1000x multiplier.

While the theme of Steam Tower might be inspired by the Victorian age, the technology underpinning it certainly isn’t, as NetEnt have also optimised the game for smart phones and mobile devices. 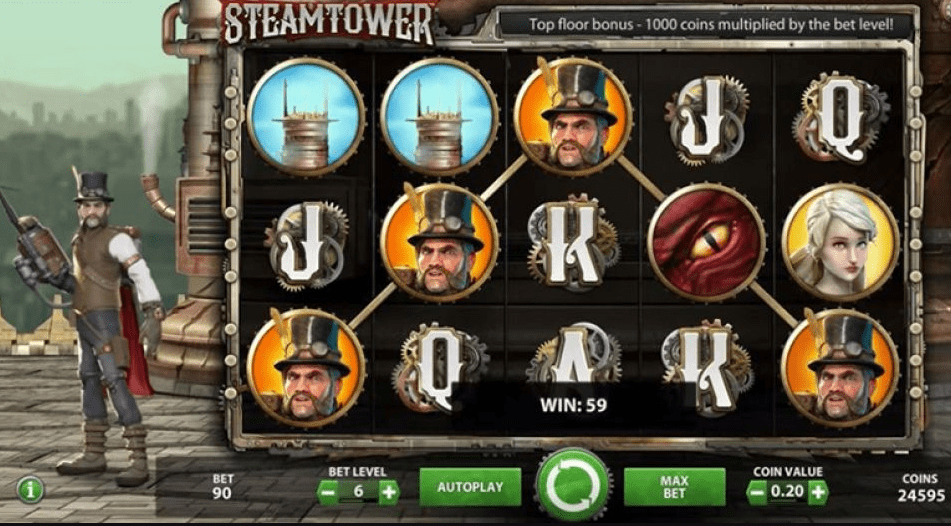 Although Steam Tower is no doubt inspired by the Steam Punk trend, you don’t have to be a cultural historian to enjoy the gameplay of this unique slot game from NetEnt. As with most great slots, the secret to Steam Tower’s outstanding gameplay lies in the simplicity of its concept. There is something weirdly nostalgic about the aesthetics of it, while the Free Spin bonus game is one of the most creative we’ve seen. Experience more fun when you try playing bingogames at Barbados Bingo!

If you enjoyed Steam Tower why not try this slot game - Starburst.