Sushi and cats. Who doesn't love them? But what would you get if you put the two together? An awesome online casino game making noise on bingo site UK, that you won't be able to stop playing time and time again!

Eyecon have really laid the Japanese culture thick on this 5 reel slot game, where you get to see the Sushi Cat slicing and dicing some of your favourite meals that you'd find that some of the most popular food joints in Japan. And like sushi itself, the slot is filled with casino promos, an allotment of spices and flavour that will get your taste buds running once you've finished collecting your winnings!

Are you on the hunt for an iGaming developer that knows exactly how to make all of their fans feel both entertained and rewarded whenever they play one of their bingogames? Well, you've come to the right place.

Established in Brisbane, Australia around 20 years ago, Eyecon always had the goal to get their  games simple yet enthralling enough to get new players to feel the experience of their casino games in mind. Not to mention getting their existing gamers to return to them as well. After receiving a lot of good reviews from their previous successes such as Fortunes Prophet, Secret Garden, and Horsing About, you can be sure that you will not feel disappointed and bored when playing Sushi Cat. 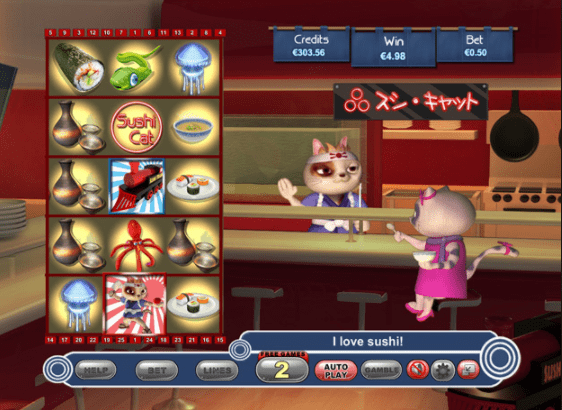 The developers did not to leave out some of the classical elements of a typical slot game, such as low paying and high paying base symbols. Your low paying symbols will be the sushi sauces, the sushi in a plate and bowl, a sushi roll. The green fish, the blue fish, the orange crab, the red octopus, and the blue fish lying on a chopping board are your high paying base symbols.

As usual, you'll have to get them in a matching combination to win a set of prizes that you can bank. There are a couple of SCATTER symbols that you'll have to watch out for, which will come in the form of the Sushi Cat and Sushi Train.

• Sushi Cat SCATTER: If 3, 4, or 5 of them appear on the reels, you'll trigger the karaoke BONUS FEATURE where you have to pick a song from a list. One of those songs can offer you a reward that multiplied by 10.

• Sushi Train SCATTER: If 3, 4, or 5, of them appear on the reels, you'll trigger the train BONUS FEATURE where you select icons that could contain a multiplier that'd be worth up to 100x your original bet.

• Sushi Karate Cat WILD: This symbol will replace all of the base symbols and trigger free rounds whenever it appears on the reels

With the large amount of high quality graphics and great entertainment that you can get in the game, Sushi Cat may as well turn into a mini web series that you won't be able to help but laugh out loud at! And with its high payout rate, you cannot resist loading up your laptop, tablet, or smartphone, and see how Sushi Cat can fill up your wallets with cash prizes! If you're a fan of feline species, care to try Big Bad Wolf slot at Barbados?