The Goonies is one of the most loved movies for kids who lived through the 80s and 90s.  If you have seen the movie, then you will recognize every character. Blueprint Gaming has taken the classic movie and created an exciting slot game complete with a very generous jackpot and numerous great bonus features. In fact, the Goonies slot machine tries to copy so much of the movie into 5 reels and 20 paylines. You will be lost on a maze of characters, bingo bonuses, and features.

About the Slot Provider-Blueprint Gaming

Blueprint Gaming is a part of the Gauselmann Group. Blueprint Gaming boasts of over 50 years of experience in the casino industry. The company originally made its name for delivering games used in arcades and pubs. But it has eventually made great success over the years.  Currently, it supplies games and digital content to online game providers including mobile casinos. It is best known for being inventive. The company’s games have a quirky feel to them. This is consistent across the entire range of their different themes.

Recently, Blueprint Gaming has become one of the leading developers of the popular Megaways slots. Megaways slots and bingo games offer a mix of six to seven reels. They also come with adjustable rows of between two and seven symbols. These create up to 1117, 649 ways to win, depending on the number of symbols present with each spin of the reels.

Some of their top games include the following: 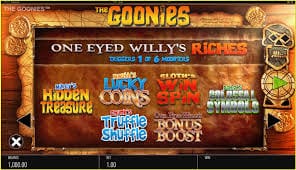 How to Play the Goonies Slot

The Goonies is a standard slot that is easy to play.  You start by choosing the coin size and set the number of paylines. Next, click on spin and you are on your way to winning the jackpot.

The main game symbols include the Pirate Flag, Treasure Chest, Medallion, One-eyed Willy, Pirate ship and the A, J, K, Q card suits. The most important symbol that you should look out for is the One-Eyed Willy Symbol. It activates a huge number of bonus features and the medallion which can be substituted for almost any other symbol. This boosts your chances of landing a winning combo. 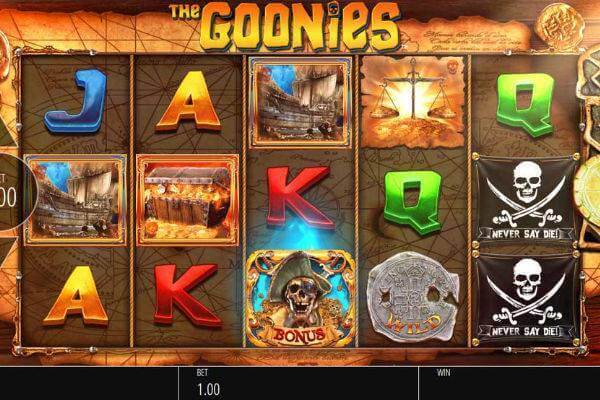 The Goonies Slot by Blueprint Gaming has incorporated many features. It comes with 6 main game features and 6 bonus features.

We will look at the main features first.

During any spin, the One-Eyed Willy’s Riches can be randomly triggered. When this happens, Willy swipes across the screen awarding the following features at random:

Truffle Shuffle Wilds:  Random wilds are added to the reels

Sloth’s Win Spin:  you are rewarded a big spin win.

Mouth’s Lucky Coins:  gold coins are added to the reels which turn into random win symbols.

The bonus games are activated by a minimum of three scatters on a spin or through the One-Eyed Willy’s Bonus Boost. The game opens a second screen with a ship’s wheel showing six diverse bonus games. You get one spin of the wheel for a chance to win one of the features displayed on a ladder to the right of the wheel. In increasing order of payout, these features are:

Fratelli Hide Out Bonus: select one of the three keys presented to you to add to your winnings. The ladder leads to the hidden tunnel sub-bonus. It gives you the chance to trigger any of the other five bonus games.

Skeleton Organ: select from the set of organ keys to uncover either a character that will award a coin win or an upgrade symbol that increases the coin wins for future picks. Revealing the three key symbols leads to an extra feature bonus. But, be wary of the crossbones and the skulls as three of them will end the bonus game.

Super Sloth Free Spins: This leads to another reel set featuring the Fratelli family. If a Super Sloth wild occurs during any spin, any Fratelli symbols on the reels change into top paying symbols.

Goonies Go Wild Free Spins: This features changes one of the premium symbols into a wild on each spin rewarding you extra prizes.

Inferno Free Spins: This unleashes an inferno at the beginning of each spin that moves across the reels from right to the left. It turns one to three consecutive reels wild. Spinning the reel will also disclose either extra spins, Collect, or the One-Eyed Willy’s Treasure. If you choose extra spins, you retrigger the feature. However, if you hit “Collect” the bonus round comes to an end.

One-Eyed Willy’s Treasure Bonus:  This bonus is activated by hitting five scatters in one spin. This is achieved through one of the extra prizes in other bonus rounds, or by betting all the way to the feature on the bonus wheel. The purpose of this feature is to gather bet multipliers. Try winning as many as you can before you can activate the booby trap, which will award you a total multiplier and return you to the main game.

Blueprint Gaming’s Goonies is a mobile-optimized slot that can be played on smartphones and tablets.  The game offers a fantastic gaming experience regardless of where you choose to play. There is no need to download any software so you can play it on any operating system.

Blueprint Gaming’s The Goonies slot offers players with exciting gaming experience.  You can relive the 80s and 90s nostalgia, thanks to the impressive movielike graphics and eccentric soundtrack used in the game.  The gameplay is quite engaging. It offers all types of bonuses and plenty of unique features that are common in other slots. This is a game that is worth a try at least once.

If you have enjoyed The Goonies Slot, why not try another exciting slot at Barbados - such as Bar-X Safecracker Megaways Slot.