Are you ready for all the fun of the fair? The Twisted Circus bingo online UK slot will feed into your fascination for all the sights and sounds of the circus, from the wonderful and awe-inspiring to the down-right weird. Expect to see performances from the likes of bearded ladies and Siamese twins as you try to win this mesmerising slot. So, sit back, get comfortable and play now. Prepare for the most enjoyable show you’ve yet to behold.

The team behind Microgaming have been in the business since the mid-90s, so you can be sure you’re in safe hands when you play one of their games. And that is definitely the case with The Twisted Circus. As you’d expect from such a renowned developer, the animations are beautifully done and filled with lots of fantastic small details. The developers have carefully crafted every aspect of this slot to give it all the existing and unsettling aspects of a real-life circus. 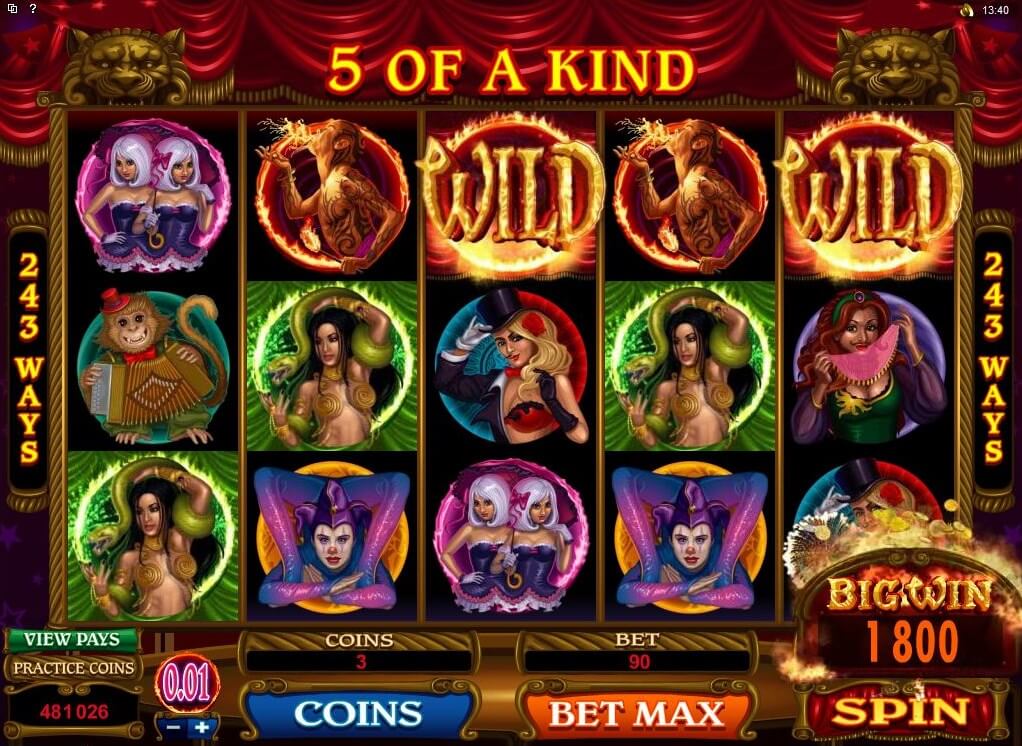 As with all Microgaming slots, The Twisted Circus features three rolls, five reels, and an impressive 243 ways to win. And just like the circus, it opens with an impressive fanfare of the instantly recognisable Circus March – get ready to enjoy the freak show!

The gameplay couldn’t be simpler as you just need to align matching symbols in a line to receive your rewards from the circus ringleader. What kind of circus would it be without the thrill of big wins? This slot is feature-rich, giving you plenty of chances to increase your winnings.

• WILD SYMBOL – The Twisted Circus symbol is the one you need to watch out for as that’s the game’s Wild symbol. It might appear at any time and once it does, you’ll be granted three free spins. All symbols can be substituted by this one, except the Ticket and Ringmaster symbol. Land on a Wild symbol and you’ll win three-times its usual value.</p.

• SCATTER SYMBOLS – This game’s Scatter symbol is a golden ticket. If two appear on the reels at any one time, you receive a generous pay out. Everyone wants to see three appear, though, as that wins you thirteen free spins in which you could triple your winnings!

• FREE SPINS – When three or more Ticket scatter symbols appear on the board, you’ll be rewarded with a free spin. During this free spin, all symbols are worth three-times their normal amount.

There’s also a special bonus game that you might get whisked away to play. To access it, you just need three of the Ringmaster symbols to appear anywhere on the third, fourth and fifth reels.

This is a brilliant game for those who are enthralled by creepy shows and colourful carnival performers. The animations and sound will make you think you really are in a bright big top, and you’ll certainly be made to feel like the ringleader thanks to all the lucrative bonus features. This is one circus performance that you don’t want to miss out on!

Another game similar to Twisted Circus when it comes to fun would be immortal romance. Try the game when you click here.