Get ready to cross the River Nile to play the Treasure of Horus free bingo sites slot game. The game takes place under the red-hot sun of Northern Africa in the final resting place of the Egyptian Pharos. You’ll have to call upon plenty of courage before you enter the ancient burial grounds and tombs, but the treasures that await you down their twisting corridors are very much worth it!

This Ancient Egyptian-themed slot games comes from the developers at Iron Dog Studios, one of 1X2 Network’s reputable brands. The guys at Iron Dog Studios are known for their future-looking games, so going with a theme from Antiquity seems like an odd move from them. They get it right though, as the stylish animations help to add a modern twist to this ancient civilisation. You certainly won’t feel like you are stuck in the past while spinning these reels!

Play games from Iron Dog Studios for chances of bonus bingo spins and offers from Barbados. 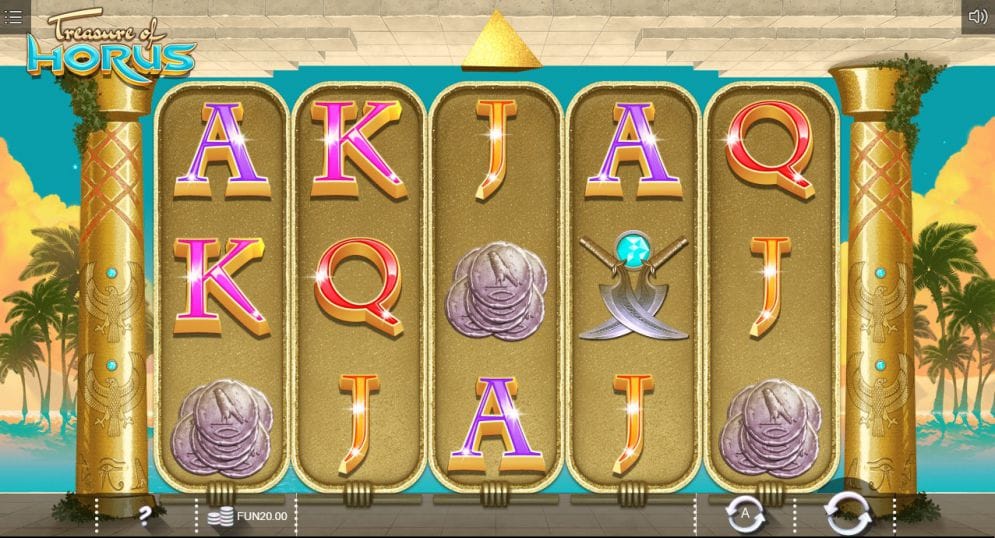 Once you arrive in Ancient Egypt, you’ll have to venture into the tomb to find the treasures hidden deep within. You’ll be met by five reels, three rows and a very generous twenty pay lines. You can’t deny that the Egyptian gods are generous!

Behind the game-play board you’ll be able to see a landscape covered in sandy dunes, pyramids and palm trees. On the board, letters make up the low-value symbols while the higher value symbols are represented by crossed swords, ancient coins, an Ankh symbol, and a statue of the god Bastet. The gods have also blessed you with a couple of bonus features as well.

• WILD SYMBOL – If you spin a blue scarab beetle, you’ve got a Wild! This little critter can take over from any of the other symbols, except the Free Spin and Scatter symbols, and improves your chances of winning.

• FREE SPIN – Whenever a scarab beetle flies onto the game board and drops a Free Spin symbol, you’ll get – you’ve guessed it – a free spin! The row the Free Spin lands on will expand and you’ll get the chance to play one of the following sets.

- THE ANUBIS CHAMBER – You’ll get the green scarab beetle Wild and six free spins. If you spin a special symbol on the third wheel, you’ll unlock the next set.

- THE TOMB OF WERET – If you spin a pink scarab along with the green one you will get six free spins and a 2x multiplier. You’ll also move onto the next set.

- THE TOMB OF HORUS – You’ll bag a Scatter symbol, green, pink and blue Wilds along with a 2x and 5x multiplier, as well as six free spins.

Ancient Egypt is a road less well travelled in the world of online slots, but it’s a good job Iron Dog Studios decided to venture down it. The theme feels very fresh and with its slick animations, excellent bonus features and various prize opportunities, it’s sure to be a hit in the gaming community. It really is worth taking a trip back in time to Egypt more often to see what the gods have in store for you. More of Barbados games. Looking for more? We have listed out the best bingogames you can try anytime!

If you enjoyed Treasure of Horus you should try White Wizard online slot - Barbados.