Twin Spin Deluxe is a colourful NetEnt online gambling bingo slot with 6 reels and a Cluster Pays feature. The slot features a high energy and electronic theme. The game has a modern feel given off by those bright colours, dance soundtrack and skyscraper images set in the background. Symbols include classic fruit machine icons that light up in neon colours like gold bells, cherries and lucky sevens. The cluster pays feature needs players to match symbols in groups of 9 on the slot’s 6 X 5 layout. Correct matches have the potential of rewarding you a jackpot of up to 10,000 coins. Stakes start from 10p to £100 per spin on all your mobile devices or when you play.

NetEnt was once known as Net Entertainment when it was formed in 1996. It’s a Swedish company among the most well-known online casino software providers. NetEnt has hundreds of games listed under its name. They were the first to create Java-based online casino software which later evolved into HTML5. NetEnt software is used by hundreds of fully licensed portals. The company not only provides online casino software, but also offers a live dealer casino platform- the NetEnt Live Casino and NetEnt Touch that’s a mobile gambling platform. NetEnt’s progressive jackpot network has paid out millions worth of prizes since it was started.

And they don't have any plans of slowing down with much bingo bonuses, bingo promotions. 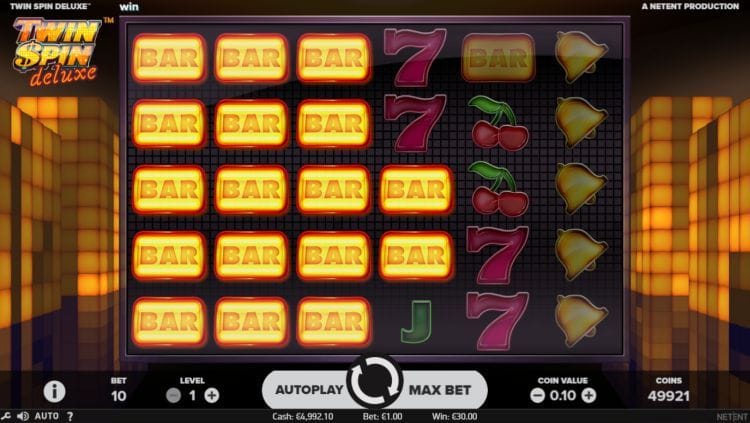 The vibrant Twin Spin Deluxe slot will captivate you from the beginning with its slick electronic sounds and neon colours that give off a modern spirit. Twin Spin Deluxe is the sequel to Twin Spin with the previous having the same graphics and feel as its predecessor. The game’s soundtrack sounds a little like that of an Ibiza nightclub. Game symbols match the vibrant feel of the game with each having a neon finish. Game playing cards include A, K, Q and J and main symbols include bars, bells, red 7s, cherries and blue diamonds.

Players will need 9 or more matching symbols to form a cluster win. Clusters can form vertically or horizontally. The playing cards pay out the least win of 100x your stake for 30 matched in a cluster. The bells and cherries pay close to 250x your stake while the bars and red 7s pay 500x your stake. The highest paying symbol is the blue diamond which rewards 1,000x your stake if you match 30 of them in a cluster.

• Twin Reel feature- In this feature each spin begins with similar, adjacent twin reels that can be linked together. These reels expand and take over up to 6 linked adjacent reels. The same symbols will be displayed across all the reels which makes it easier to form bigger clusters. 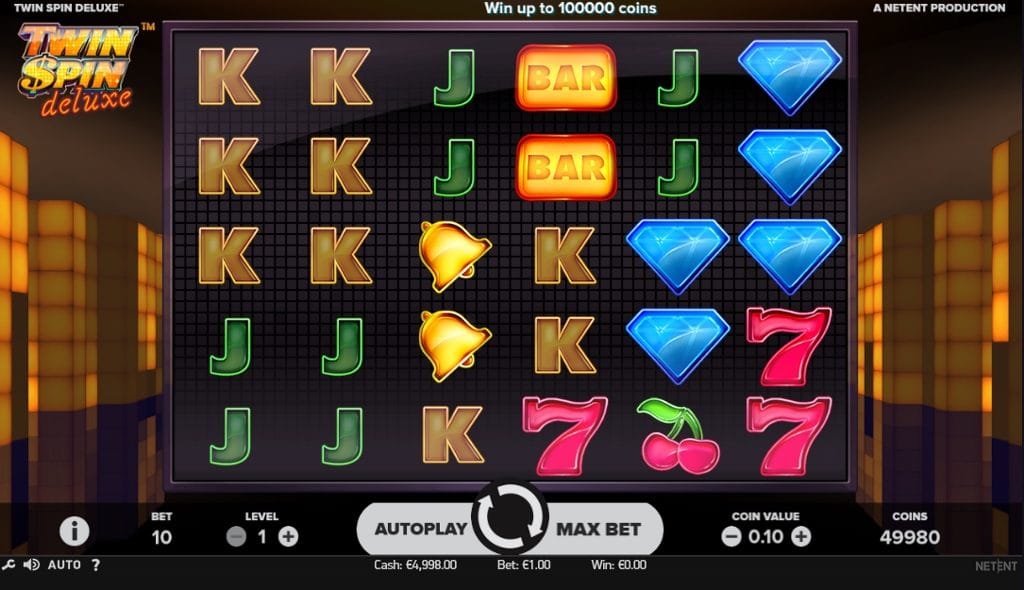 Twin Spin Deluxe is very much like the original version, but with enhanced graphics and extra reels. The maximum payout could go up to 1,000x your stake while the original version has a payout of up to 1,080x your stake on each spin. The slot’s variance stands at the middle and is a good twist on the classic fruit theme. Twin Spin Deluxe is worth checking out. Try your luck in playing free bingo games and who knows, you might win the biggest prize!

This Barbados online slot is also worth playing, if you liked Twin Spin Deluxe that much.