You would be mistaken for thinking that the title of this game is a play on the classic wheel of fortune, however this game by Quickspin is actually set in the Far East of Asia, where martial arts is commonplace and traditional. In this game you’ll find three martial arts fighters and their master amongst a myriad of colourful jewels.

Quickspin is a fairly new bingo games free to play company, only being founded in 2012 – the CEO once worked as head of sales for one of the big names in the gaming industry: NetEnt. They’re quickly making a name for themselves with innovative and high-quality games, adding more and more titles to their portfolio to have more options to play bingo online. 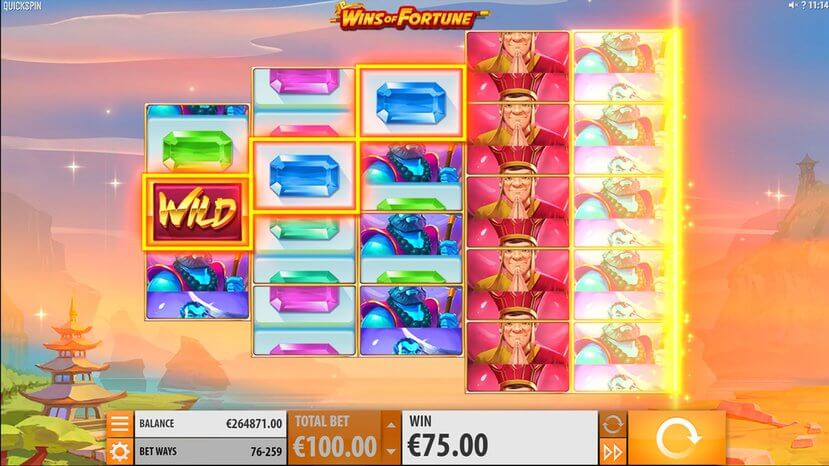 As mentioned, Wins of Fortune takes place in Far East Asia, and so, you’ll see the reels are set on a background of Asian landscape with a temple visible in the left corner of the screen. You’ll immediately notice that the reel setup is quite unique – you don’t have the usual grid format when you begin, initially you’ll have 76 ways to win, however, this bumps up drastically with each consecutive win, as you will be awarded free respins. With each free respins a five-position reel will be added to the right-hand side of the screen, and this will continue with consecutive wins until you have a 5x5 grid all together - upping the number of ways to win up to 259!

The super respin is triggered after your fourth consecutive win – in this, all winning symbols stay on the grid and the reels keep spinning until there are no more winning symbols on the reels.

The wild symbol on the reels substitutes for all other symbols, and also increases the payout on a winning combination.

In terms of the other character symbols, the red-headed fighter and the master are the highest value, both paying out 2.50 if you match five of them in one spin. Although this doesn’t sound like a lot for the highest value symbol, this is a medium volatility game with up to 259 ways to win – so it does add up quickly!

The red-headed fighter and the master are followed by the pig fighter and the giant, both paying out 1.50 if you match 5, and then out of the gems, the pink and blue gem are worth the most. 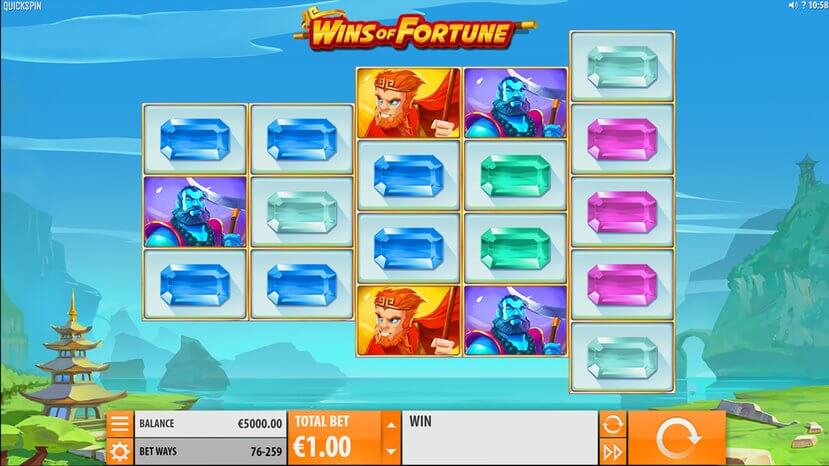 This Wins of Fortune game helps Quickspin live up to its reputation: this game is totally unique with an interesting reel setup that continues to grow until players have up to 259 ways to win! Although it feels like it’s missing a bonus game in there, it’s not a necessity as the number of ways to win combined with the medium volatility of the game means that payouts can quickly build, ensuring an enjoyable, lucrative game. A nice twist on the traditional Asian-themed slots.

Play now an amazing slot that we recommend you try.