Consider yourself the romantic type? Then Cupids Arrow will be right up your street. Yes, the whole theme is pretty cheesy, but that’s why we love it. With cliché vibes all the way through, join us on a starry-eyed journey to collect some desirable winnings. Made up of vibrant red and pink reels, the backdrop of this game screams Valentine’s Day.

From start to finish love is in the air with a slot game full of heart-warming gestures. That’s right – the game’s playing icons are exactly what you’d expect with everything from a cute-looking teddy bear to heart-shaped chocolates and a bunch of red roses. But you couldn’t make a game called Cupid’s Arrow without an appearance from the man himself. Positioned at the top of the reels you’ll find everyone’s favourite match-makers just waiting to release his arrow. Play to find out what Barbados online casino's Cupid's Arrow has in store for you.

Eyecon are great contenders when you look at the online gaming industry. Despite being based in Brisbane, they have made a name for themselves all over the world, and have been releasing great quality casino games since 1997. Boasting slots which are both simple and innovative, their designs appeal to all kinds of audiences – beginners, professionals, young, old, you name it they accommodate. In fact, a number of their titles are considered some of the best there is, and have been well-received globally. Find out amazing games like Cupid's arrow now! 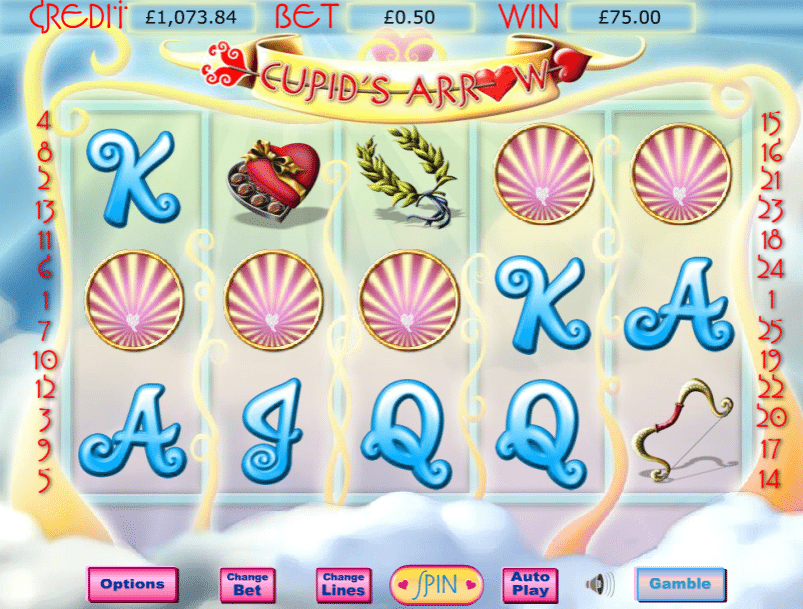 Staying true to the classic slot format, this game comes with a generic 5 row and 25 paylines set-up as well as all the traditional features. The WILD in Cupid’s Arrow is represented by a gold heart and works just the same as any other, given it stands in for all of the game’s symbols, excluding the SCATTER of course. The SCATTER can be identified by the candy hearts symbol and will be most profitable when you land 5 across your reels. This will trigger the prize pick where you’ll become Cupid. If you’re not quite following, players will use a bow and arrow to multiply their total bet.

We can’t forget the game’s Free Spins either. These come into play when you see Cupid appear across on reels. However, you’ll need to land 3 or more if you want to activate the feature. If you’re lucky you could land as many as 9 Free Spins, and it doesn’t stop there. Secure a Cupid symbol during this feature and you could receive a further 10 Free Spins – love has never been so rewarding, right?

Cupid’s Arrow is one of the top bingo games gamblers will either love or hate. Even if romance isn’t your thing, this game is a must-try for anyone who enjoys winning. Not only is the game-play easy to get your head around, but it also comes with enough features – SCATTERS AND WILDS – to keep you entertained. Plus, with a jackpot of 800,000 coins up for grabs, putting up with a few soppy gestures will be worthwhile.

If you enjoyed Cupids Arrow why not try Starburst game?