Those of a nervous constitution might want to look away now… the Deadworld slot is not one for the fainthearted! You’ll have to navigate a post-apocalyptic world where zombies walk and could attack you at any minute. In this slot game, you’re one of the last humans alive and it’s up to you to fight off the zombies while trying not to get infected yourself. Ready for this spine-tingling adventure? Get ready to spin and see how well you can survive in this bingo online casino!

1X2 Gaming has put together their gaming expertise with a whole bunch of chills to create this horror-inspired bingo bonus slot game. Now a subsidiary of the reputable 1X2 Network, one of the UK’s most prominent games companies, this team of developers specialises in casino slots, virtual football, and fixed odds gambling games. Deadworld is one of their few games that sees them move into the horror genre and embrace the living dead. You can play more of their bingo games at Barbados Bingo. 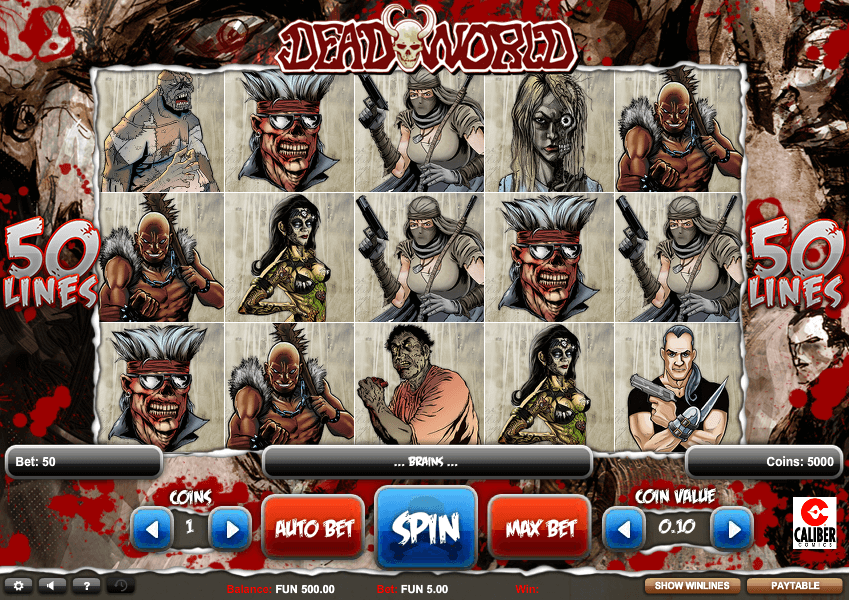 All set to see if you have what it takes to survive the apocalypse? Let’s see if luck is on your side when you start spinning! There are five reels in the game and fifty pay lines, so you actually have a very good chance of pitting your skills against the undead!

There’s a lot of blood and gore on the game screen, but the game board itself is a lot cleaner cut, featuring a grey background with some terror-inducing figures on each square. These zombie figures all have their very own character, and you’ll meet them all including the Mummy, the Mexican, and Bikini Girl. Don’t worry, though, you aren’t fighting them on your own – other zombie killers, like the Veiled Assassin and Pony-Tail, will be able to help you along the way.

• WILD SYMBOL – You might think that all the zombies in this game would be wild, but there’s only one true Wild symbol here and that’s the female. She’s got ‘WILD’ written on her, so you won’t be able to miss her. The Scatter is also a female zombie and will help you score as many combinations as possible.
• BONUS ROUND – Spinning more than three bonus symbols will activate the chilling Bonus Round. It takes you to a fairground shooting range, but not everything is all it seems. Instead of shooting the usual moving targets, you will need to try and shoot zombies. You’ll win a cash sum for each one you hit, but the aim is to try and shoot six for the big prize.
• AUTO-PLAY – Not got much time? Simply pay your deposit, tell the game how many spins you want, and then hit auto-play. The slot does the rest for you. This will speed things up and is also a useful feature for those who don’t want to risk going over budget. 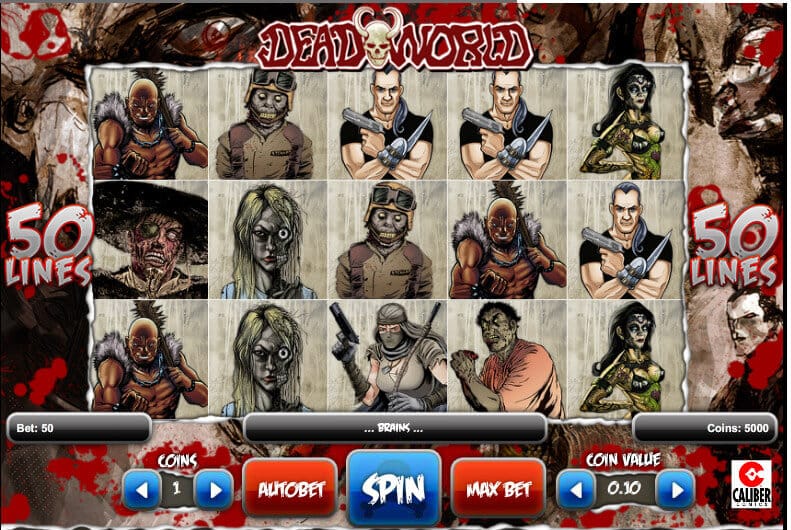 There aren’t that many zombie-inspired slot games at the minute, so Deadworld certainly feels like a much-needed breath of fresh air in the gaming world. As long as you can stomach the graphic scares, you’ll have a great time trying to build up your pot of winnings! If you can't get enough of this game, try this Barbados spin game too!