If you’ve ever wondered what it would be like to see two powerful elements battle it out, today is your lucky day, as PariPlay brings to you Fire vs Ice. Fortunately for all involved, you don’t actually have to pick a side when playing the 5 reels of this play online bingo slot, though no one would blame you for rooting for your favourite.

Crackling with heat and freezing cold temperatures, this is a memorable interface that offers a fresh take on the traditional fruit machine. This slot machine doesn’t have a story, but in truth it doesn’t need one, all it needs is for you to pay that 25p and get the 25 winlines rolling. Things are about to get tense in here…! 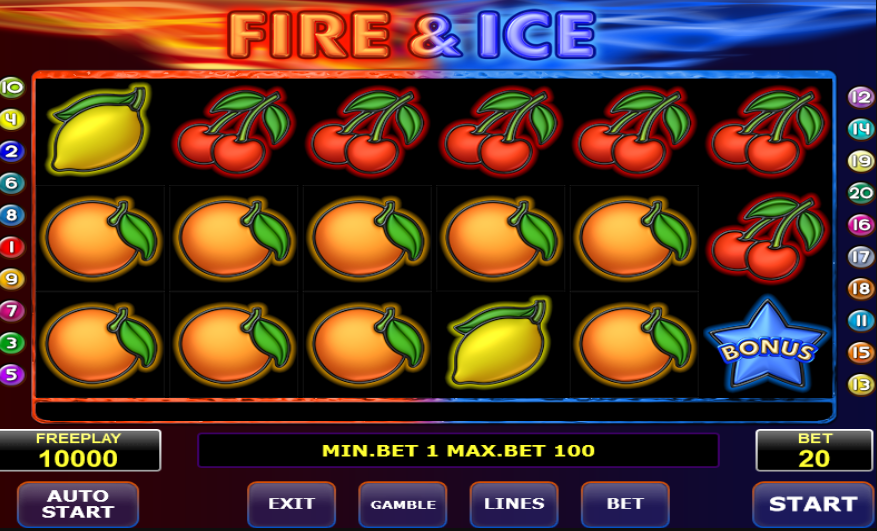 Based on the Isle of Man, PariPlay is a company who has managed to branch out from humble beginnings, paving its way to greatness through online bingo games it creates. Although we don’t know its exact foundation date, what we do know is that since the beginning, it’s aimed to develop innovative gameplay.

This can be seen across the UK bingo promo slot machines produced by the team, as they’re always packed with stellar graphics and a medium variance of features. Given how adaptable their software is when playing across desktop and mobile platforms, it’s not surprising that so many are part of the PariPlay experience.

You’ll find yourselves in a steampunk style world, with a beam of fire and ice fighting for top place above the grid’s border; this fight is key to the free spins. Not that the spins are all that matters, seeing as how this slot machine offers a lot of reasonably priced returns, with some symbols rewarding £500 per five of a kind.

This isn’t a slot that has much depth in its features, but when the special rounds do begin, they pop with energy that only natural elements can, as you’ll see for yourselves soon enough.

● Hot and Cold Wild: There’s two 7 symbols on the grid that act as wilds, with them each bringing different extras. The fiery 7 will expand across your grid when it appears, while the icey 7 will do the same, but then freeze the wilds into place for one spin.

● Fire Free Games and Ice Bonus: In a similar fashion to the wilds, the free games have two different features. Firstly, you have the fire gun scatter which can win you up to 15 spins depending on how many you find, with you able to activate more spins. Then secondly, there’s the frozen bonus symbol, an icon that will burst the fire gun and launch into a special mini game.

Fire vs Ice isn’t a game that you’ll be able to play again and again, but PariPlay doesn’t need it to be, as it’s a contemporary take on the fruit machines we know and love. The conventions of the game have been modified, resulting in a thrilling form of entertainment that you can put down as easily as you picked it up!

If you enjoyed Fire Vs Ice why not try Fluffy Favourites online slot?