We’ve all heard of siestas, a nap that typically takes place in the mid afternoon sun to avoid the heat, but we’ve never heard of a Fruitful Siesta until now. Brought to you by Playson, this fruit loving slot machine doesn’t look to be anything special, and yet when you delve deeper into its features, you reveal an extremely unique title.

Sporting cutesy imagery that resembles that of a nursery, there’s an aesthetic at work here that won’t suit everyone’s tastes. But if you can look past its adorableness, you’ll find a series of 10 winlines that offer a flipping good bonus (and yes, ‘flipping’ is a hint at something). This Playson title has gone out of its way to being special, so let’s cut those naps short and see what’s there when we open our eyes. 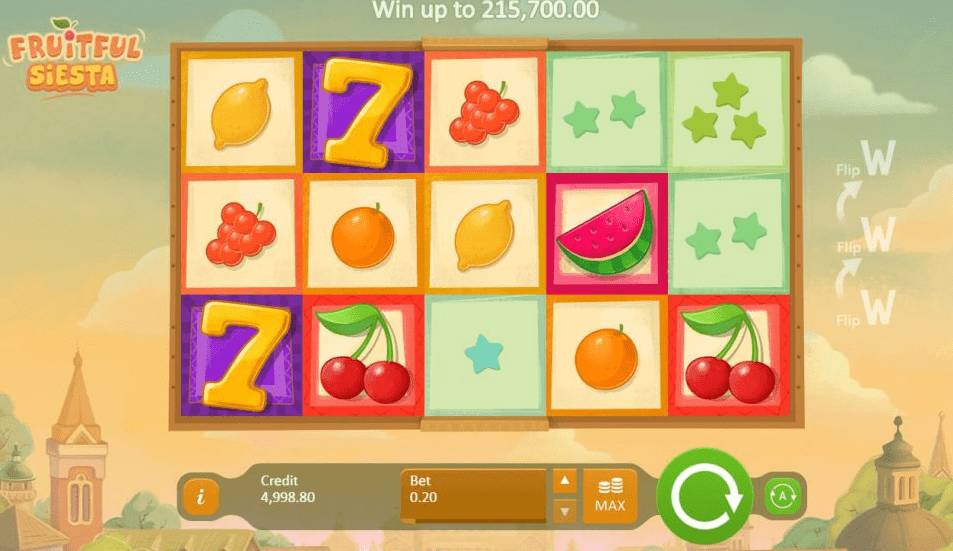 Dozing in the sun is likely something that Playson and its creators are used to, given the fact that they’re based in Malta. Although not the hottest of climates, this location is known for its sun, as it is its European bingo online industry; Malta is to Europe when Vegas is to America. Consequently, we can expect good things from this part of the world.

But what of Playson itself? They began back in 2012, a total of six years ago, arguably when the iGaming scene was a lot different from what it is today. And yet Playson has continued to create software that not only entertains us, but that has produced relationships with various brands, such as NYX and Quickfire. If nothing else, this informs all who view the brand, be them business or consumer, that Playson means business in promotion bingo games.

In spite of the game’s title, we don’t get a theme that matches the name; instead of Spanish references and/or characters, we get a 5 reels grid that gives us classic fruit machine imagery. True, the symbols have been made to look more fresh and contemporary, but this is nonetheless a revamped slot machine from a classic period on.

Although this doesn’t match up with our expectations, it’s the paytable we’re concerned with, as it holds the Flip Feature, a bonus that’s only activated when you’ve taken the plunge and started playing the game. If you’re ready to do this, bet of 20p to get started.

● Flippy Wild: This is the heart and soul of what makes Fruitful Siesta work, as the Flippy Wild triggers the Flip extra. What this flip does is change symbols with the same worth, e.g. the 7 and the bell, into a single icon. This, in theory, should lead to higher returns. What is more, there’s three tiers of the Flip Feature, with the top level resulting in huge payouts and stacked symbols. To get to the next level, you need another Flippy Wild to show up.

That’s it. There’s no free spins and no mini game to play, yet Fruitful Siesta has given us a medium variance title with a lot of excitement about it like any other online bingo games found at Barbados. The Flip Feature is what makes all of this work, and without it this game would fall flat; true it’s an acquired taste, but one that most players will enjoy because of its individuality.

If you enjoyed Fruitful Siesta why not try Starburst online.