The clue’s in the name; this is a game based on tumbling rocks brightened with the glint of precious gems. With the tumble of rocks, this is a game that lets you win big. It’s not a traditional slot game but that makes way for some other nifty features. See more details below to know how to play online bingo slot like Gem Rocks.

About the Developers of Gem Rock Slot Game - Yggdrasil

With the name of the tree of life from Norse Mytholgy, Yggdrasil like their symbol, are breathing new life into slot games. Although they are only a couple of years old, founded in 2013, they certainly know how to develop a game for everyone to enjoy. They even have managed to scoop up some awards in the short time they’ve been around, including the not-too-shabby International Gaming Awards Innovator of the Year 2017 award. Their games can be found on Barbados' casino promotions.

This is a 6 reel slot game, with bet options from as little as 0.25p up to £100. Here’s the best part…the game has a staggering 4,096 paylines. The sounds of this game are immensely satisfying; there is the crunch and crumble of falling rocks every time you spin and an uplifting jingle for when you win. The background music is calm and melodic, not too distracting but great to have on whilst you play.

Visually, this game works well. On a grey-blue background, the rocks are crude and realistic, with the gems lighting up the greyness. Like most games, 3 of the same (rock gems in this case) will trigger a win, but YYggdrasil have really pulled out the stops with the below features:

· DROPDOWN FEATURE - each time you win (and boy will you win), then some new combinations will drop down. Keep winning and the rocks will keep tumbling.

· GEM FEATURE - the hat trick of this game is Gem Rock’s gem feature. The lucky numbers here are 2,5,9 dropdown wins in a row. Once these have been won, a new gem rock will land (heavily) at the top – essentially, the gem rock will allow for bigger and better combinations that let you win. 2 dropdown wins will get you a 2x2 gemrock, but really, you want to get the bad boy, the 4x4 which can only be gained by getting 9 dropdowns in a row.

The rocks each have their own colour and gem shape inside which not only is aesthetically pleasing, but each have their own rewards, including the crescent moon gem which grants 35 coins. Keep an eye out for the red and yellow star rock though. 5 of these in a cluster will award you well, perhaps even a substantial 200 coins. 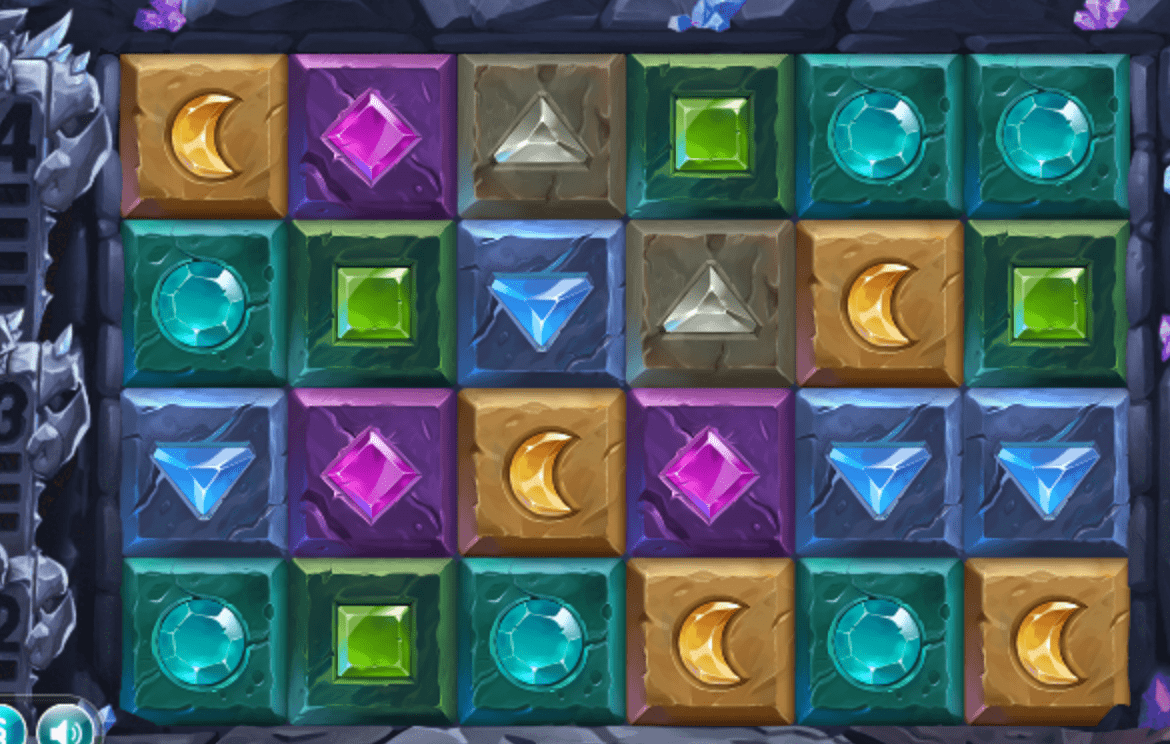 Gem Rocks is a great game, taking a simple yet effective concept and design, and turning it into an enjoyable game that offers some exciting features. The best part, and perhaps its hook, is that instead of 5 reels like most games out there, it has 6 and a huge amount of chances to win. It is a very well-designed game, both in terms of visually and in its content. We have some bingo games players can play at Barbados.

If you enjoyed Gem Rocks why not try Starburst game.