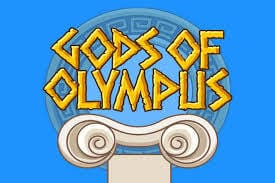 The gods have decided to look kindly upon you and grant you access to play with them up in the clouds. Zeus, the king of all the Ancient Greek gods, rules over this free bingo casino slot game so you might be expected to appease his wishes to win big. Thankfully, though, if you’ve got Lady Luck on your side, you won’t have to worry about the king of the gods too much. You’ll be greeted by some of the other deities of Olympus as well and by the time you leave with your winnings, you’ll be an expert in Greek mythology!

1X2 Gaming is already known for its Barbados online slot games steeped in mythology – just take a look at their other slot games like Gladiator of Rome, for example. Gods of Olympus is another great title to add to their portfolio and it combines their usual terrific graphics and modern take on a traditional theme. The sound effects and animations are extremely slick and help bring this ancient world into the 21st century. 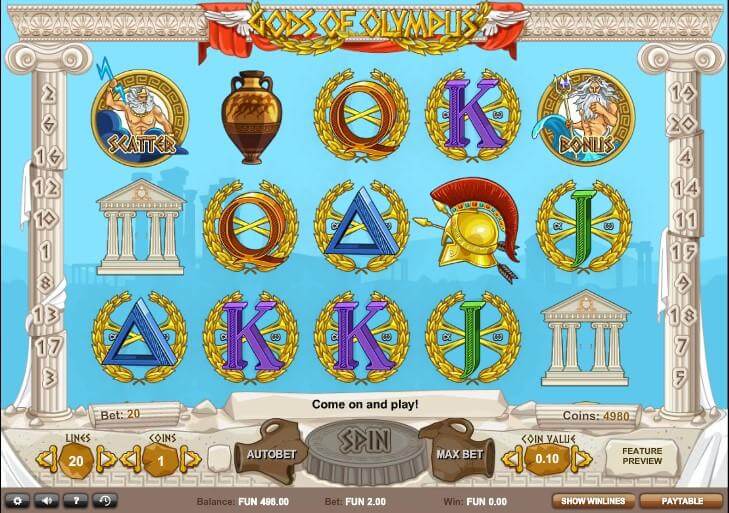 Climb up to the top of Mount Olympus and meet all the holy characters you will be playing with. You’ll meet them surrounded by ruined columns and an ornate ceiling, looking out across the city below. The slot features five reels and twenty-five pay lines. Symbols are as Roman as you’d expect – thought they don’t all come from the heavens as some of the symbols are taken from the mortal world, such as the antique vases, centurion helmets and Roman ships. These make up the higher-value symbols while letters of the alphabet represent the lower values. As with all 1X2 Gaming slots, there’s a good range of bonus features.

• WILD SYMBOL – The goddess Athena is your Wild for the game. She will replace any basic symbol, except the two Scatters: Zeus and Poseidon.

• FREE SPINS – If you spin three Zeus Scatters, you’ll trigger some Free Spins and a Scatter prize. Even though you won’t win any extra Free Spins while already on a free go, you could still activate the Poseidon Scatter.

• BONUS FEATURE – If you spin three Poseidons then you get to play the Bonus Round. You will have to pick one of five antique pots to see what prize lies within. If you get to play this on a Free Spin, you could win up to ninety times your original stake. As you can probably tell, that’s a highly profitable Bonus Round for such a basic slot game! 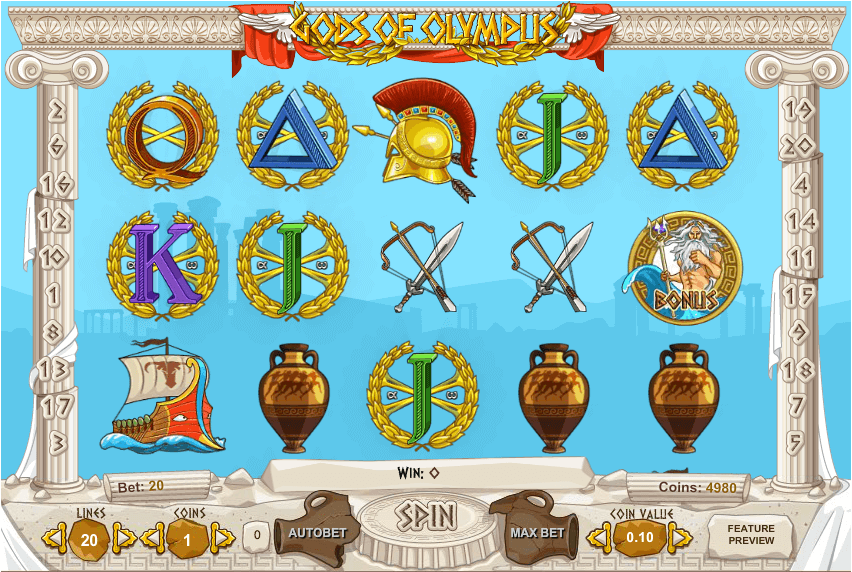 None of the bonus features in Gods of Olympus are particularly ground-breaking, but there are plenty of things to enjoy in the game. The animations are as superb as you would expect from any of 1X2 Gaming’s games, and the authentic background music really rounds off the whole gaming experience. Even though it can sometimes seem tricky to activate the bonus round, the game still offers some great returns. There’s a good chance you could return from Mount Olympus with your pockets lined in gold! Would you like to try some bingo games as well?