Can you claim dominion over the sea? Can you sail stormy seas and stay afloat? This online bingo game brings a Viking theme to the Slingo world. Spin the slippery reels to mark numbers on the grid and command your seamen to victory, with Slingos awarded for each line you complete.

Slingo Berserk is yet another Slingo game brought to you by Slingo Originals, the developers that own renowned bingo games such as Slingo Fortunes, Slingo Lightning, and Slingo Fluffy Favourites. It follows in the same high-quality footsteps of their other bingo games.

About Slingo Originals – The Pioneers Behind Slingo Berserk

Slingo Originals pride themselves on innovation and creativity, and they value how well they place player interaction at the core of all that they do. As developers of online bingo games, they are difficult to match because they’ve enabled decision-making and skill to make pivotal changes in gameplay, meaning more than just luck is paramount to winning.

Slingo Originals have developed several popular online bingo games, such as Slingo Fortunes for instance. This one’s nerve-wracking! Do you have the nerve to bet it all on an envelope? If you love mystery you’d also love Slingo Fortunes. 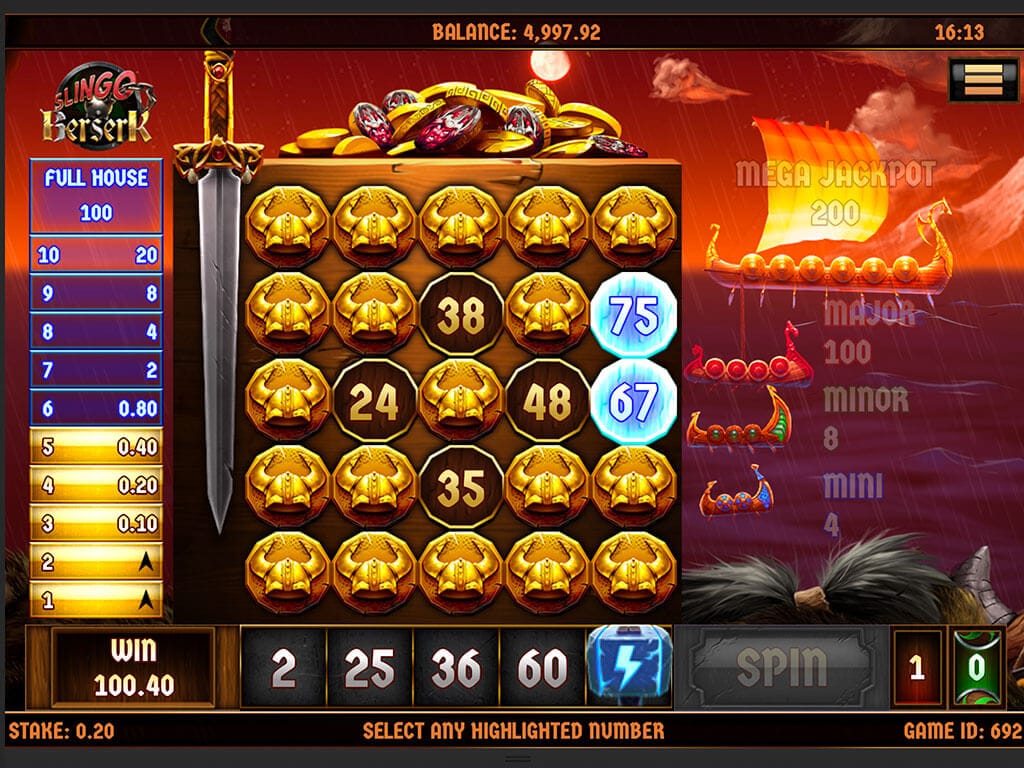 The aim of this type of online bingo game is to get a line of five numbers: horizontally, vertically, or diagonally. With each Slingo you win, the cash prize increases. And catch this. With 11 Slingos you’ll be bathing in winnings with a whopping 500x your original stake! Check that out! Each game lasts for 11 spins, unless you accumulate free spins.

Before setting sail in this online bingo game, it’d be smart to familiarise yourself with some of Slingo Berserk’s symbols. The lightning hammer is a key symbol to look out for as it represents the wild. When lightning strikes, you are now able to mark off any number in the column above, and a coin will propel upwards. If this coin cascades down the screen you could win one of four sensational prizes!

Unsurprisingly, this online bingo game is swamped with beautiful Viking imagery. Long boats, swords, helmets, and gold can be seen around the 5x5 grid. But make sure you look out for the Joker symbol, as each time it appears, a coin will be collected in the treasure chest. Each one gives you the possibility of entering a bonus round! We’ll fill you in on that in a minute.

You can play this bingo game online for as little as £0.20, or you can live life on the edge by hitting the max bet of £100. 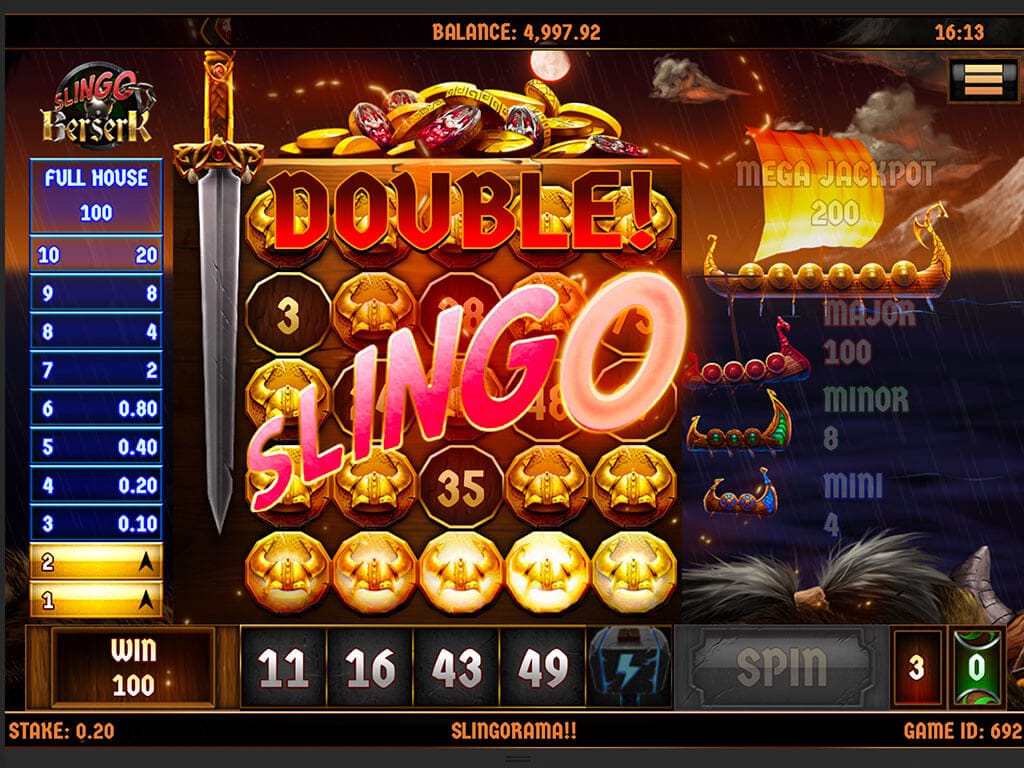 As mentioned, each time the Joker symbol appears in Slingo Berserk, you will receive a coin in your treasure chest. Each one gives you a chance to trigger the bonus round. With the Jackpot bonus you pick a coin, which will reveal a mini, minor, major, or mega symbol. Collecting three of the same symbols wins a jackpot amount! These are what they mean:

Bringing a Viking theme to Slingo is epic! It brings a stylish, engaging, and unusual feel to playing bingo online. We think it’s executed amazingly. The gameplay is modern, and the music and various features are aptly chosen and incorporated. It’s also a plus that the prize floor is low, as you only need three lines to get a prize.

Slingo Berserk invites Barbados Bingos players to slice their way through a row of number to steal a Slingo and raid some prizes. It’s an adventure that offers not 1, 2, or 3, but 4 mouth-watering jackpots. It’s one of those bingo games that offers a real chance to win some phenomenal real money prizes.

With all this in mind, we think you’d love Slingo Berserk. From the renowned developers Slingo Originals, it’s no surprise it’s been developed so well. This is a name you can trust. So play Slingo Berserk today. Sail the high Slingo sea today.

Barbados Bingo offers numerous games like this, such as Shamans Dream 2 Slot.