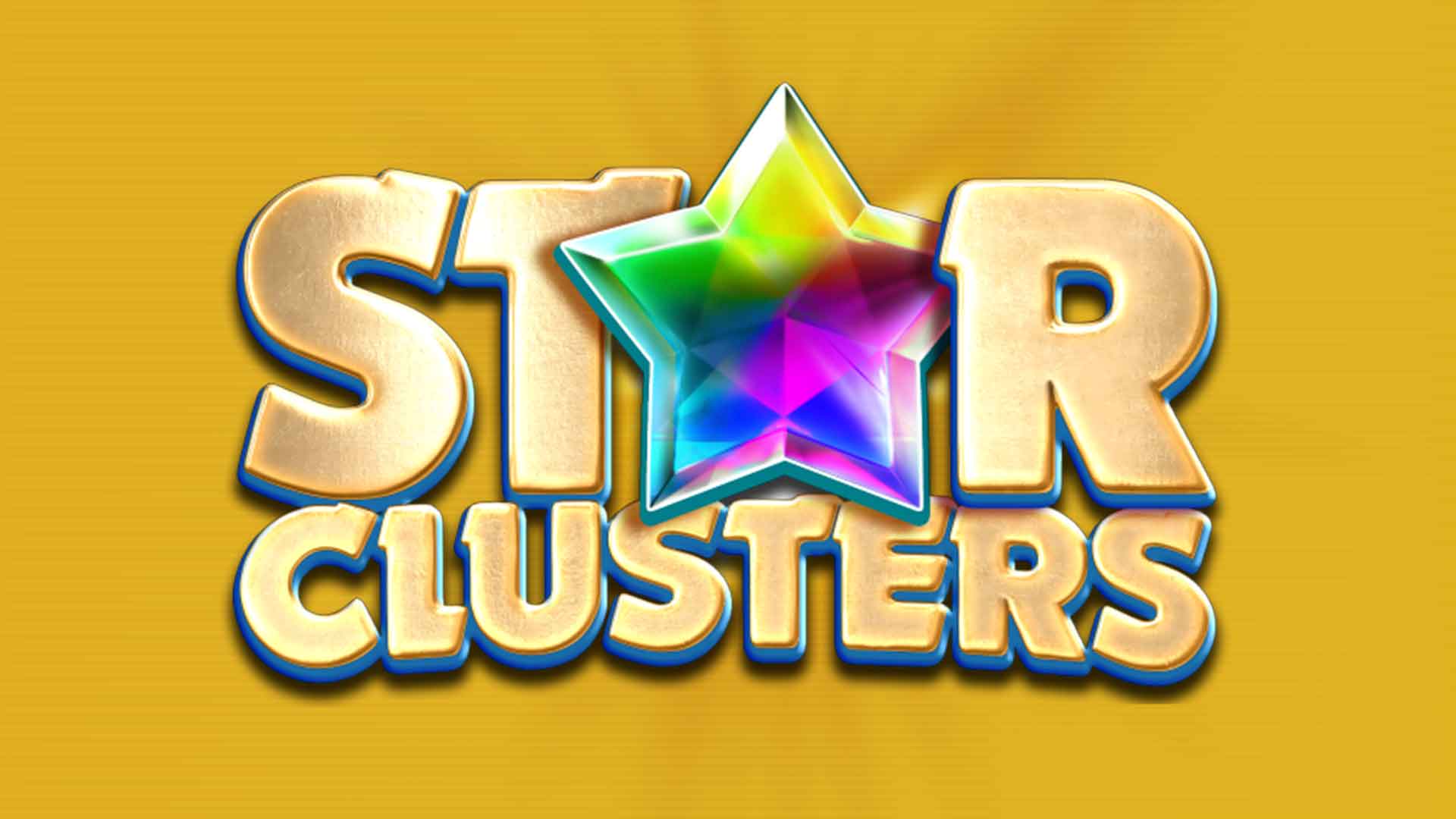 Australian online bingo and slots developers Big Time Gaming are known for some top hitting online slot games, and Star Clusters is another one. It’s a little different to their normal reel configuration as it comes in with a 4x4 grid expanding up to 8x8 through one of the bonus features, so the mechanics are a little different, but super effective.

In terms of theme, Star Clusters has a classic style made up of colourful, nicely designed gems set in a grid with a golden border and a bright colourful background. The graphics are simple yet effective and nicely presented.

With a super high variance rating, you’re in for a bumpy but very exciting ride with Star Clusters. The RTP is above average quite reasonably at 96.51% which we always love to see of course. Choose to get involved across any single device with stakes of between 20p and £20 at online bingo and slots site Barbados Bingo.

About Big Time Gaming - The Pioneers Behind Star Clusters Slot

Launched in Sydney, Australia, Big Time Gaming are a fantastic slots and bingo (amongst other online casino games) development agency. They’re known for their thinking outside of the box through cool slot bonuses, and these tend to go hand in hand with the high variance nature of the slots they produce.

One of the biggest achievements that Big Time Gaming have hit in their journey was the invention of the famous Megaways. With 117,649 ways to win plus expanding and cascading reels, this must have taken quite some work but it certainly paid off and helped rank the outfit with the best of the new bingo games online and casino developers.

The Megaways engine is available to all now, but let’s take a look at some of the slots that have propelled Big Time Gaming into the best of the best:

A lot of these awesome Big Time Megaways online slot games are definitely worth checking out. You can play bingo online or slots at Barbados Bingo.

Playing Star Clusters - What to Expect

Paying in closets instead of rows, the symbols in Star Clusters are made up of a bunch of different coloured and shaped gems, a little similar in style to the classic game Bejeweled. All of these symbols represent different values when connected in clusters of five or more during the base game.

As is the case in Big Time Gaming’s Megaways engine, the symbols will disappear once a cluster win is made (after the MegaClusters is activated - see below), and the symbols above will drop into their place. This means that the grid makes way for new gems to drop in and new combination to be formed, meaning that you can win multiple times from one spin if you’re lucky.

The other symbol to look out for in Star Clusters is the star, which is the wild, and will substitute for any of the gems on the grid to hopefully assist in landing a winning combination of symbols and pay out. 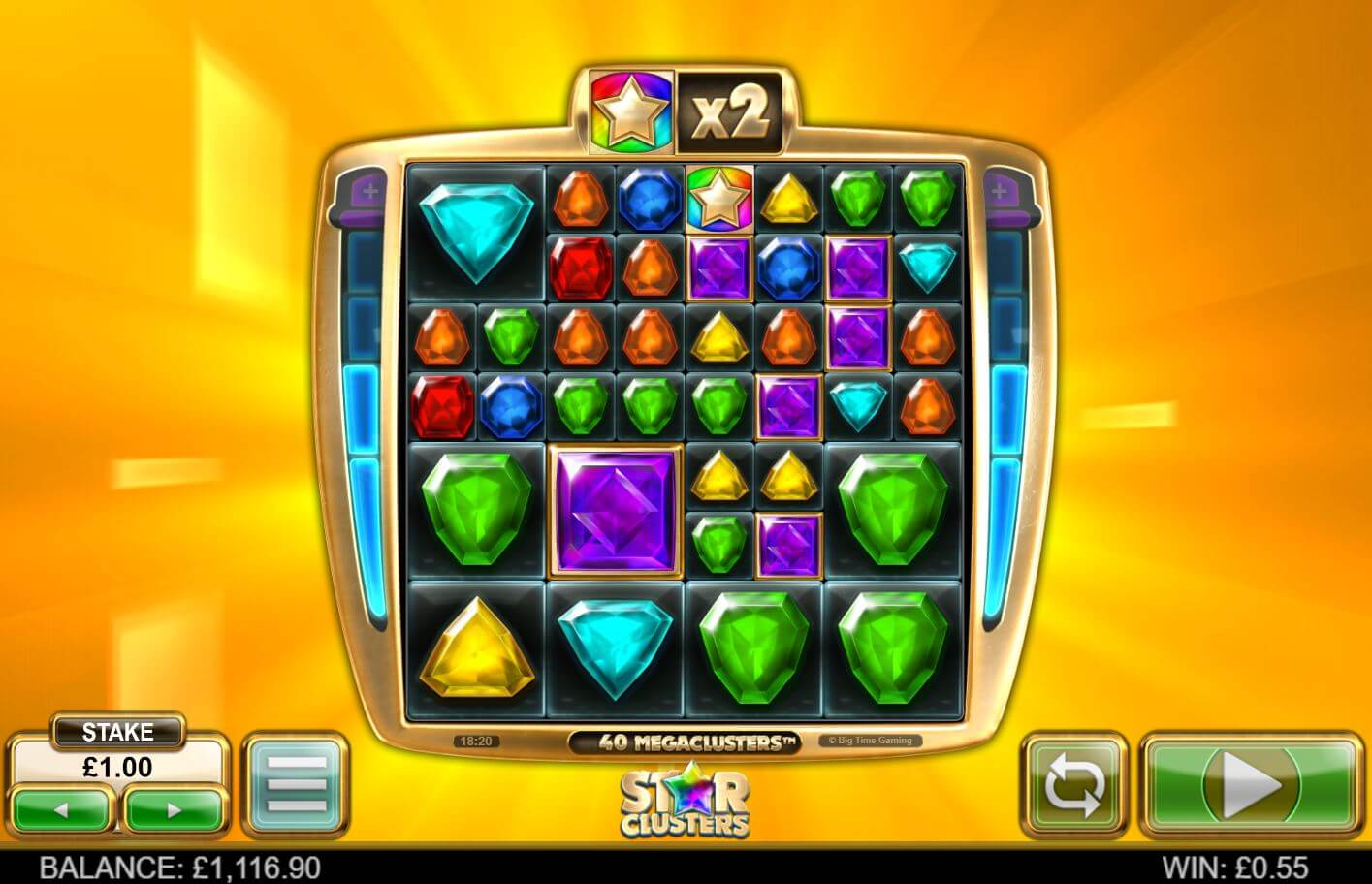 Further to the Star Wild, there is also a Gold Wild in Star Clusters which does the same thing, but goes one step further by carrying a 1x multiplier. You can land as many as possible to increase that multiplier, which will multiply your winnings for that particular spin.

On top of this, Star Clusters offers the MegaClusters and Avalanche bonus games which is the way to expand the grid as mentioned before. Every symbol that comes from a win will split into four smaller symbols, then these symbols will disappear after they form wins as mentioned before.

To access the free spins of Star Clusters, you’ll need to get five reactions. The more reactions, the more free spins. There are no extra bonus features attached to the free spins that aren’t available in the base game.

So, as we said, this is definitely something a little different from Big Time Gaming but sometimes change is good, no?

Well, it is for the most part in this instance. While it might take some getting used to, Star Clusters is a lot of fresh fun and we’d recommend giving it a go.

If you have enjoyed Star Clusters Slot, why not try another exciting game at Barbados - such as Lucky Neko Gigablox Slot.