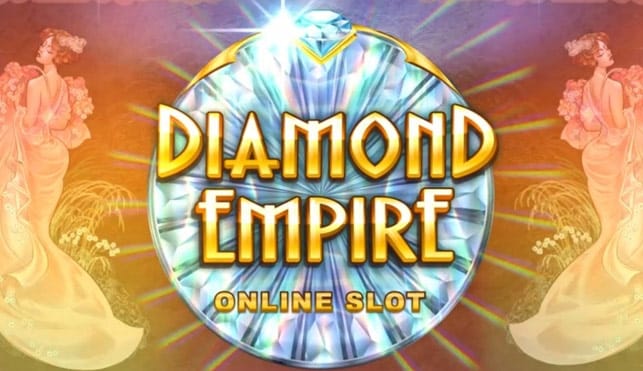 The words ‘Diamond Empire’ conjure up visions of lavish lifestyles – far beyond the reaches of us ‘normal’ folk. But in this casino online bingo slot game by Microgaming, that lifestyle is brought straight to your front door – think classy and glamorous, with a touch of old-school nostalgia and plenty of diamonds to add a bit of sparkle.

Microgaming is an online games provider that’s been around since 1994, when they launched what they claim to be the first online casino. Since then, they’ve gone from strength to strength, adding a myriad of online games to their portfolio. Diamond Empire is just one of many high-quality slot games that Microgaming has brought into the market. Have fun and enjoy these amazing games with non-stop gameplay! 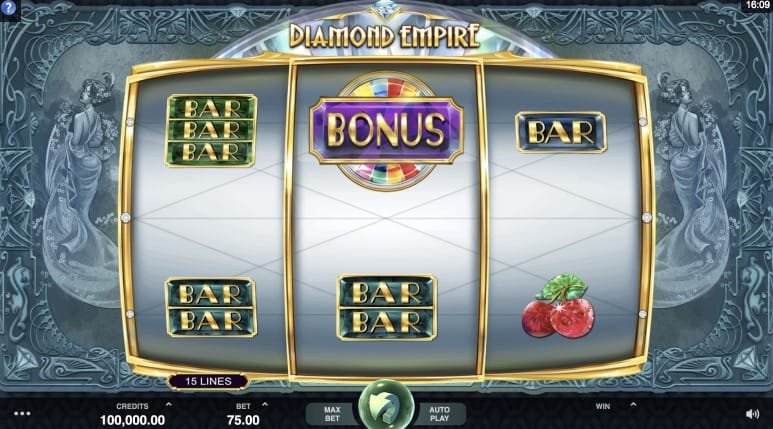 An art nouveau inspired slot game, Diamond Empire has a simple and classic feel: with only 3 reels and 15 paylines, you could be forgiven that this online slot can’t offer much. However, it’s a high volatility game with a bonus wheel, scatter symbols, wilds and multipliers – so you can definitely rack up some decent payouts here. The regular symbols you’ll see are the diamonds, bars and sevens – bringing a bit of nostalgia to a new-age slot game. The diamonds are the most lucrative of the symbols, giving you a double multiplier, and then the next most valuable symbol is the 7’s – awarding you 80 coins if you match 3 of them in a spin. This is then followed by the cherries, the triple bar, double bar and then the single bar.

Wild symbol – the diamond is the wild, and it’s the most important symbol across the reels, and when you land them you’ll be automatically awarded multipliers of your total bet. If you land 1 wild you’ll be awarded a 2x multiplier, if you land 2 wilds you’ll get a 4x multiplier, and so on. You can even land stacked wilds which can give you up to 650x your total bet!

Scatter symbol – in this game, the bonus symbol is the scatter and if you land 3 or more in a spin you’ll trigger the wheel bonus game, where you’ll get one spin of the wheel with a guaranteed cash prize win. The top prize in the wheel bonus is 888x your total bet. 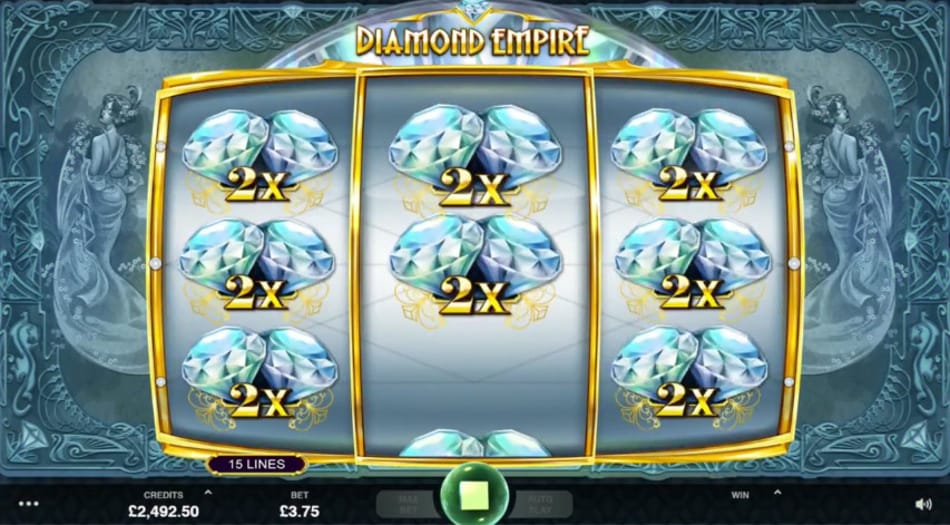 Diamond Empire brings a classy theme into the 21st century – for people who used to play the old-school slot games, this game will bring a hit of nostalgia. Not only that, Microgaming have added some cool bonuses into what is usually a simple setup – meaning that you get more out of this than you would back in the day. It doesn’t quite hit all the notes in terms of a modern slot game though, and Microgaming have definitely done better. That being said, this isn’t a bad game, and the multipliers plus the bonus wheel can really help the payouts add up! Do  you want to try some of our bingo games?

If you enjoyed Diamond Empire why not try Lucky Leprechaun?