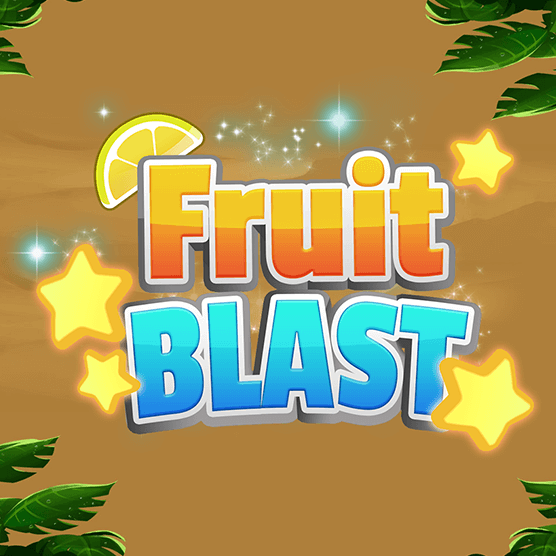 Fruit Blast is a highly addictive and fun bingo UK online game. It is very different from the slots that players may be used to. It does not offer Wilds and Scatters but instead offers unique and generous Bonus Rounds.

The online game adds a personal touch by including bartenders as benchmarks for different levels. Each bartender is not only unique in appearance and personality but also in the bonus feature they offer!

Skillzz Gaming was founded in 2014, and their bingo games (like their name suggests) require skill. They have successfully integrated the concept of skill in a largely luck-based world. Players are finally in control of how the game unfolds! Some of their games include:

You can play these bonus bingo games in Barbados. 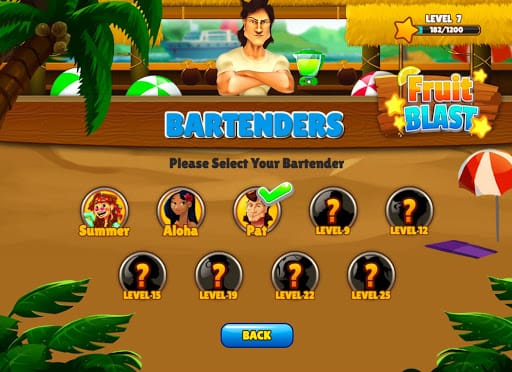 About the Gameplay of this Online Slot Game

Fruit Blast has a gameplay that is very similar to that of mobile sensation Candy Crush. Players are expected to blast identical symbols that appear in clusters of 3 – either horizontally or vertically.

The game does not offer the usual Wilds and Scatters but it does offer multipliers and unique bonus features. To trigger the multipliers, you’ll have to blast at least 7 identical symbols. The other features are highlighted below.

The Jackpot is represented by a symbol that has the word ‘Jackpot’ written across it. If you blast a cluster of them you will land the Jackpot Win which is X1000 of the total bet!

The Bonus is represented by a symbol that has the word ‘Bonus’ written on it. If you blast a cluster of them you will trigger a bonus feature. There are 8 different bonus available and the one you unlock directly corresponds to the bartender and the level that you’re on. Below are more details.

BARTENDERS AND THEIR BONUS FEATURES

There are 9 bartenders in total. The game begins on level 1 with a bartender named Summer. The first bartender, Summer, does not offer any bonus features but the remaining 8 bartenders each have their own features. Below is an outline of the level required to unlock these bartenders and their respective features.

1) Level: 2
Bartender: Aloha
Feature: Hawaiian Shake
- Fruits are placed in a blender in exchange for a cash prize

3) Level: 9
Bartender: Koko
Feature: Pick & Win
- Like the name suggests, you are to turn over coins to reveal the prizes beneath. There are 6 coins in total and you can keep flipping them over until you uncover the ‘collect’ option

4) Level: 12
Bartender: Cassandra
Feature: Goth a Fruit
- Similar to Pick & Win, you are to overturn tiles to uncover the prizes beneath
- There are 5 tiles in total, you can keep uncovering until you reveal ‘collect’

5) Level: 15
Bartender: Coach Max
Feature: Happy Hour
- Like any good Happy Hour, in Fruit Blast you get a drink on the house
- The drink (shake) is equivalent to 7 tiles

6) Level: 19
Bartender: Maitre D
Feature: Side Dish
- This feature gives you 1 free game
- The free game is accompanied with a X10 multiplier

7) Level: 22
Bartender: Mary
Feature: Double Shake
- This feature initially offer 4 hidden options for a cash prize
- You will have to turn 1 of the 4 coins over to reveal your base prize
- Then, 2 new coins are presented – 1 coin will double your prize, and the other (‘collect’) will end the bonus round
- If you’ve doubled your prize, 2 more coins will be presented and again you will have the opportunity to double what you just doubled
- The bonus round ends if you land ‘collect’ OR land double 3 times

8) Level: 25
Bartender: Echo
Feature: Pick & Win 2
- There will be 12 coins presented
- Uncover as many coins for cash prizes
- This stops once to land a multiplier
- The prize then is the total of all the cash prizes you uncovered, and then multiplied with your multipliers. 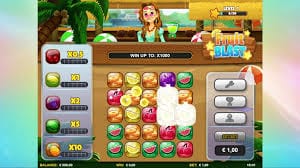 Fruit Blast is one of those slot games that you simply cannot stop playing. It is fun, colourful, and has the potential for great returns. It’s like Candy Crush on steroids. Highly entertaining, and highly recommended!